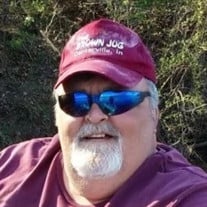 RICHMOND, Ind. – Timothy D. “Tim” Allison, age 57, of Richmond, Indiana, died unexpectedly Thursday, May 13, 2021, at his home. Tim was born on October 24, 1963, in Richmond, Indiana, where he was raised. Tim welcomed his first born, Timmy Dale, on June 26, 1982. He then moved to Alexander City, Alabama, where he met and married his wife, Angela. On January 10, 1994, they welcomed Tim’s second child, Elizabeth, also known as “Toots”. Timmy and Elizabeth were the most important parts of his life. He was a devoted father and husband, who went above and beyond for his family and everyone else. Tim enjoyed fishing, family time, working on cars, and yelling, “ROLL TIDE ROLL!” during game day. He was also known as a problem solver, who often took on difficult and unwanted projects between work and helping around the house. Tim will be deeply missed by his wife, family, friends, and all who knew him. “…till we’re together you and me. To all of those that think of me, be happy as I go out to sea. If others wonder why I’m missin’ just tell ‘em I’ve gone fishin’.” Survivors include his parents, James Travis (Pam) Allison and Gloria (Jack) Parrott; sister, Sherri Thomas; wife, Angela Allison; kids, Elizabeth Allison and Timmy (Ashley) Allison; grandkids, Kelton Faught and Travis William; nieces, Jessica and Jackie Thomas and Jaycee Biga; and “adopted kids”, Brianna Allen, Loreena Livesay, and Maryshay Stearns. Condolences may be sent to the family via the guest book at www.doanmillsfuneralhome.com.

The family of Timothy D. "Tim" Allison created this Life Tributes page to make it easy to share your memories.