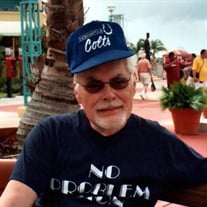 RICHMOND, Ind. – Robert W. “Bob” Robbins, age 89, of Richmond, Indiana, died Saturday, September 5, 2020, at Reid Health. Born April 28, 1931, in Richmond, Indiana, to Russell and Alice Irene Dafler Robbins, Bob lived in this community most of his life. He graduated from Richmond High School and attended Indiana University, where he was a member of the Singing Hoosiers. Bob was a partner at Robbins Matherly and Dils Insurance. He was a member of the Kiwanis Club in Richmond for many years and had served as secretary. Bob belonged to the Glen Miller Society. He grew up attending the former Reid Memorial Presbyterian Church and, later in life, became a member of Trinity Evangelical Lutheran Church. Bob had a life-long love of politics. He also loved to travel, which included taking 25 different cruises. Bob enjoyed watching sports, especially the Colts, Pacers, and IU. He liked listening to classical music, played very loudly, and was often caught “directing” in the living room. A year ago, Bob had the privilege of getting his picture taken with the Ohio State University Marching Band’s sousaphone player who dotted the “i” in Ohio. Survivors include his wife of 57 years, Janet “Jan” Porter Robbins; children, Robert (Pam) Robbins Jr., Ande Starr, and Russell (Angie) Robbins; grandchildren, Missy (Brian), Alex, Ryan, Katie, and Rachael; great-grandson, Wesley; and cousin, Joan Youst. He was preceded in death by his son-in-law, Mike Starr; parents; and brother, Kirby J. Robbins. A graveside service to celebrate the life of Robert W. “Bob” Robbins will held at 2:00 p.m. Friday, September 11, 2020, at Earlham Cemetery, 1101 National Road West, Richmond, with Rev. Cliff Nunn officiating. Arrangements are being handled by Doan & Mills Funeral Home, 790 National Road West, Richmond. Memorial contributions may be made to an animal shelter of the donor’s choice. Condolences may be sent to the family via the guest book at www.doanmillsfuneralhome.com.

The family of Robert W. "Bob" Robbins created this Life Tributes page to make it easy to share your memories.