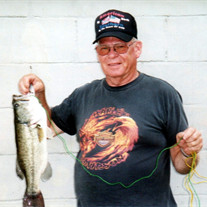 RICHMOND, Ind. - Richard Grover "Catfish" Turner, age 78, of Richmond, Indiana, died Monday, June 22, 2020, at Reid Health. Born July 27, 1941, in Crockettsville, Kentucky, to Roy and Edna Riley Turner, Richard served in the U.S. Army. He worked as an electrician at NATCO. Richard had a very big heart and was loved by many people. He will be missed. Survivors include his twin daughters, Sheila Ann Maxfield of Hamilton, Ohio, and Shirley Spencer of Eaton, Ohio; brothers, Danny and Thurman Turner; sisters, Edna Lou Deaton, Virginia Giselbach, and Shirley Smith; nieces; nephews; and many fishing friends. He was preceded in death by his parents and brothers, Billy Roy, Denvard, and John Vernon Turner. There will be no public services for Richard Grover "Catfish" Turner. Arrangements are being handled by Doan and Mills Funeral Home, 790 National Road West, Richmond. Condolences may be sent to the family via the guest book at www.doanmillsfuneralhome.com.

The family of Richard Grover "Catfish" Turner created this Life Tributes page to make it easy to share your memories.