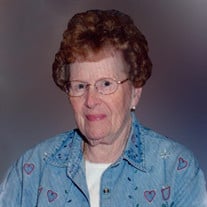 RICHMOND, Ind. – Rhea Guntle Spaulding, age 102, of Richmond, Indiana, died Saturday, August 1, 2020, at Arbor Trace. Born August 29, 1917, in Miamisburg, Ohio, to Edward and Jane McCabe Wagner, Rhea was a 1935 graduate of Miamisburg High School. She lived in West Alexandria, Ohio, most of her life before moving to Richmond to be with her daughter, Jane. Rhea retired as a secretary from Rike-Kumler Company in Dayton, Ohio, where she worked for 26 ½ years. Rhea always said she lived in the “best of times”. Rhea enjoyed traveling, working puzzles, and spending time with her grandchildren. She also did counted cross-stitch, which was museum quality. Rhea took care of her family with love and grace. She shared her talents with friends generously and was at peace with her God. Rhea will be missed by all who knew her. Survivors include her daughter, Jane L. Warren of Richmond; grandchildren, Jean Ann Healy of Richmond and Stevee R. (Amanda) Warren of Louisville, Kentucky; great-grandchildren, Emily L. Healy of Richmond and Jessica Loaiza of Fairbanks, Alaska; stepdaughter, Barbara Flowers of West Alexandria, Ohio; and many friends. She was preceded in death by her husband, Richard H. Spaulding; first husband, Eugene D. Guntle; daughter, Jean Ann Guntle; grandson, Steven E. Healy; parents; and brother, Norman Wagner. Private graveside service for Rhea Guntle Spaulding will be held at the convenience of the family. Burial will be in Fairview Cemetery in West Alexandria, Ohio. Arrangements are being handled by Doan & Mills Funeral Home, 790 National Road West, Richmond. Memorial contributions may be made to: Animal Care Alliance, 1353 Abington Pike, Richmond, IN 47374. Condolences may be sent to the family via the guest book at www.doanmillsfuneralhome.com.

The family of Rhea Guntle Spaulding created this Life Tributes page to make it easy to share your memories.