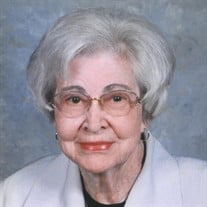 INDIANAPOLIS, Ind. – Mary Lou Millis Johnson, age 99, of Indianapolis, Indiana, died Tuesday, August 4, 2020, at St. Vincent Home Health and Hospice with her family near. Born March 13, 1921, in Campbellsburg, Indiana, to Frank and Ruth Braxton Millis, Mary Lou lived in Richmond, Indiana, most of her life. After the death of her husband, Dr. George M. Johnson, who died in 1999, Mary Lou moved to Indianapolis where she resided at The Forum at the Crossing until last year. Mary Lou was a devoted and active volunteer with the Medical Auxiliary, Meals on Wheels, Gray Ladies, and several other organizations. She was a member of Sylvan Nook Church of Christ. Mary Lou and George enjoyed spending many winters with their family and friends in Singer Island, Florida. Survivors include her four children, Jane Johnson of Indianapolis, Charles (Laura) Johnson of Fishers, Indiana, Sarah (Larry) Copeland of Carmel, Indiana, and Craig (Valerie) Johnson of Cincinnati, Ohio; five grandchildren, Liz Van Dyke, Leslie Mosley, and Anne, Sam, and Rachel Johnson; seven great-grandchildren; and brother, James (Sara) Millis of Columbus, Indiana. She was preceded in death by her husband; parents; and brother, Dr. Arthur Millis, who also lived in Richmond. Private services for Mary Lou Millis Johnson will be held at the convenience of the family. Burial will be in Earlham Cemetery. Arrangements are being handled by Doan & Mills Funeral Home, 790 National Road West, Richmond. In lieu of flowers, memorial contributions may be made to: Reid Health Foundation, 1100 Reid Parkway, Richmond, IN 47374 (ReidHealthFoundation.org) or Sylvan Nook Church of Christ, 1221 Sylvan Nook Drive, Richmond, IN 47374. Condolences may be sent to the family via the guest book at www.doanmillsfuneralhome.com.

The family of Mary Lou Millis Johnson created this Life Tributes page to make it easy to share your memories.