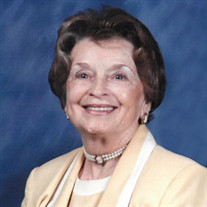 RICHMOND, Ind. – Marilyn Alverda Jay Clarke, age 94, of Richmond, Indiana, joined the Lord peacefully Friday, June 18, 2021, at Reid Health surrounded by her loving family. Born September 19, 1926, in Webster, Indiana, to Herschel and Edna Albin Jay, Marilyn and her older sisters, Janet and Margaret, and brothers, Melville and Stuart, all grew up in the Quaker religious faith and were members of the Webster Friends Meeting House. Being the third daughter born in a row, Marilyn became her father’s “farmerette” early in life. Summers would find her behind the wheel of a tractor every day. She claimed that the solitude certainly helped to shape her shyness, while allowing ample time to cultivate dreams. A “Rosie the Riveter” at age 16, Marilyn worked at Perfect Circle Defense Factory as an Inspector of Aircraft Piston Rings, returning to the job immediately upon graduating from Webster High School in 1944 until Victory over Japan Day, September 2, 1945. She then moved on to work at Belden, where she was a star on the fast-pitch softball team, including being the starting pitcher and scoring a walk-off home run to help the team advance to the Regionals. Marilyn lived on the farm until March 5, 1948, when she married Kenneth “Kenny” Clarke at Second Presbyterian Church, leaving her birthplace, as well as her father’s birthplace. She and Kenny raised two children, Christopher Lee and Pamela. An amazing homemaker for more than three decades, Marilyn made family dinners, sewed clothes and Halloween costumes, tended to huge gardens, and made tomato canning an annual tradition. She also cherished hosting many family gatherings for their extended families. Marilyn never forgot the hardships she endured growing up during the Depression, which helped her fully appreciate the good times that came later in life. She knew the value of a dollar and never spent money on luxuries for herself. Later in life, Marilyn became an avid walker and treasured long brisk walks with her friends and family well into her late 80s. She mowed her own ¾ acre lawn until late last spring. By far though, Marilyn’s most amazing quality was her faith in God. She was an ever present and active member of Second Presbyterian Church, before moving to First Presbyterian Church. Marilyn prayed devotions daily, even in her last days, and was a good and faithful servant. A genuine Christian in every sense of the word, she lived every day on her life for the betterment of others. “His lord said unto to her, Well done, thou good and faithful servant: thou hast been faithful over a few things, I will make thee ruler over many things: enter thou into the joy of thy lord.” Matthew 25:23 Survivors include her children, Christopher Lee (Janice) Clarke and Pamela (Daniel) Disser; four grandchildren, Leslie (Paul) Clarke Royer, Jenna Disser, Amelia (Rory) Kramer, and Jack Disser and five great-grandchildren, Sophie, Greta, Sam, Hope, and Lily, who she doted on; brother, Stuart Jay; numerous nieces and nephews, who she loved; and very special friends and neighbors. She was preceded in death by her loving husband, Kenny; parents; sisters, Janet Wright and Margaret Corbett; and brother, Melville Jay. Visitation for Marilyn Alverda Jay Clarke will be from 11:00 a.m. to 1:00 p.m. Thursday, June 24, 2021, at Doan & Mills Funeral Home, 790 National Road West, Richmond. Funeral service will follow at 1:00 p.m. Thursday, June 24, 2021, at Doan & Mills Funeral Home with Pastor LydiaGrace Gray officiating. Burial will be in Earlham Cemetery. Memorial contributions may be made to: First Presbyterian Church, 100 North 10th Street, Richmond, IN 47374. Condolences may be sent to the family via the guest book at www.doanmillsfuneralhome.com.

The family of Marilyn Alverda Jay Clarke created this Life Tributes page to make it easy to share your memories.