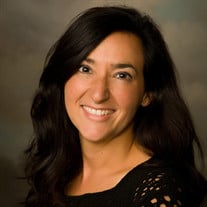 RICHMOND, Ind. – Kimberly Docherty Vincent, age 51, of Richmond, Indiana, went to her eternal resting place on Tuesday, January 11, 2022, at her home, holding her beloved Jeremy’s hand. Those who knew Kim best would describe her as devoted, brave, hardworking, fun, loving, and loyal. Family was the most important thing to Kim. She was married to Jeremy Wayne Vincent for 29 years, and they were the love of each other’s lives. Their relationship began as high school friends and, after much persistence by Jeremy, he won her heart over. From that point on, best friends became partners for life. They shared a love of gardening, art, music, animals, and restoring homes. Together, they combined these passions and lived a full life at the family homestead, known as South of Elkhorn Farm. Kim embraced the importance of continuing family traditions, always welcoming family to the place that means so much to them. The pride of her life was her two children, Lily Ann and Henry H. Vincent. She loved being a mom. Kim loved supporting them and went to extraordinary lengths to show them that anything is possible. Whether it was helping Lily create the Vincent Farm Art camp or volunteering at Henry’s fishing tournaments, she was the mom who not only helped her own children, but also helped the other kids who were living out their dreams. For Lily, it was supporting the pursuit of becoming an artist and later, an educator. For Henry, it was supporting his fishing interests and later, helping him become a competitive angler. Kim would have done anything for her kids. At the end of the day, she loved nothing more than the simplicity of sitting in the sun, enjoying time in nature, and talking to her family. Kim is survived by her parents, Thomas and Jayne Docherty of Fishers, Indiana, and two sisters, Christine (Brian) Fagnani of Detroit, Michigan, and Carrie (Ryan) Steele of Bloomington, Indiana. Growing up, the family of five moved frequently which solidified their strong bond. The sisters were incredibly close and cherished the time they spent together. Kim was the quintessential middle child. She was the peacekeeper, always willing to go with the flow, yet still fiercely competitive, never wanting to lose at a game of cards. Kim was treasured by her immediate and extended family, which included many brothers-in-law, sisters-in-law, aunts, uncles, nieces, and nephews. She made family gatherings special with her creativity and fun-loving spirit. Kim had the ability to know what was important to each of us and found a way to show that through her words, acts, or deeds. Kim was loved by so many. Her smile, easy demeaner, quick wit, and sense of humor were infectious. At Richmond High School, she was a Devilette and an active member of Junior Achievement. Her house was the gathering place, creating so many memories over the four years. In college, Kim was a member of the Sigma Upsilon chapter of Kappa Delta sorority. Her pledge class became fast friends and bonded over practicing for IU Sing, Pizza X breadsticks, music at the Peanut Barrel, and IU basketball. As a co-worker, she was a compassionate listener with a sense of humor that made even the hard days fun. Kim simply made everything better. At each stage of her life, she formed lifelong friends who described her as confident, fun loving, and one-of-a-kind. Educating became her life’s passion. Kim graduated from Indiana University School of Education in 1992 and earned a Master of Education from Earlham College in 2007. Over the years, she educated hundreds of students. The cards, emails, notes, and letters that “Mrs. Vincent” received echoed a consistent message. She made learning fun, students looked forward to seeing her each and every day, and her passion for reading was contagious. The significant impact Kim had on her students was recognized in 2012 when she received the Teacher of the Year Award from Richmond Community Schools. As a teacher of the gifted and talented program (LOGOS), Kim devoted herself to individually investing in each student and challenging them to reach their goals and potential. She was a mentor, role model, and second mother to many of her students. Long after they left her classroom, Kim continued to have a relationship with her students. They remained an important part of her life. Throughout her battle with cancer, Kim only missed school when she had treatments scheduled. Kim was in the classroom doing what she loved, just three days prior to her passing. Whether she was your friend, wife, mother, sister, aunt, colleague, teacher, mentor, or role model, Kim made a positive and significant impact on your life that will never be forgotten. She was beloved by many, inspiring in her battle with illness, and already deeply missed. Visitation for Kimberly Docherty Vincent will be from 4:00 p.m. to 7:00 p.m. Friday, January 21, 2022, at Doan and Mills Funeral Home, 790 National Road West, Richmond. Funeral service will be held at 11:00 a.m. Saturday, January 22, 2022, at First English Lutheran Church, 2727 East Main Street, Richmond with Pastor John R. Walker and Pastor Chip Belanga officiating. Burial will be in Elkhorn Cemetery, following the service. To honor Kim’s passion for education, the family has established two educational funds. In lieu of flowers, the family ask that you consider contributing to either: - Kimberly Docherty Vincent Scholarship Fund to benefit Richmond Community School students, c/o Wayne County Foundation, 33 S. 7th Street, Suite 1, Richmond, IN 47374. - Continuing Education of the Children of Kimberly Docherty Vincent Fund. Contact Carrie Docherty Steele at [email protected] to contribute to this fund. Condolences may be sent to the family via the guest book at www.doanmillsfuneralhome.com.

The family of Kimberly Docherty Vincent created this Life Tributes page to make it easy to share your memories.