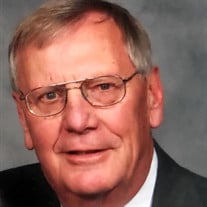 RICHMOND, Ind. – Kent Gerald Klinge, age 82, of Richmond, Indiana, died Tuesday, October 12, 2021, at EverHeart Hospice Care Center in Greenville, Ohio. Born August 5, 1939, in Indianapolis, Indiana, to Herman Carol and Eleanor Graham Klinge, Kent had lived in Richmond for the past 50 years. He served in the U.S. Marine Corps. Kent graduated from Hanover College in 1963 with an A.B. degree and earned his J.D. degree from IU School of Law in 1967. Klinge was one of the top trial lawyers in Richmond for more than 25 years in the 70s, 80s, and 90s. One of his greatest accomplishments was defending the city in the massive gas explosions that killed 41 people and destroyed most of the downtown area. Only seven months out of law school, Klinge’s involvement in the case lasted more than two years, and the jury trial lasted more than seven weeks. During this time, he gained an instant reputation as a solid trial lawyer. When not at work, Kent was a proud supporter of the Republican Party. He was also a member of First English Lutheran Church and a past president of Forest Hills Country Club. Kent greatly enjoyed spending time with his grandchildren, as well as fishing and golfing. Survivors include his wife of 56 years, Francie Ellen Shimek Klinge; son, John (Chris) Klinge of West Lafayette, Indiana; grandchildren, John Morland Jr., Matthew Bridger, and Madison Grace; and many friends. He was preceded in death by his parents. A private memorial service for Kent Gerald Klinge will be held in West Lafayette, Indiana, at the convenience of the family. Arrangements are being handled by Doan & Mills Funeral Home, 790 National Road West, Richmond. Memorial contributions may be made to: Help The Animals, Inc., P.O. 117, Richmond, IN 47375 or Cope Environmental Center, 1730 Airport Road, Centerville, IN 47330. Condolences may be sent to the family via the guest book at www.doanmillsfuneralhome.com.

The family of Kent Gerald Klinge created this Life Tributes page to make it easy to share your memories.