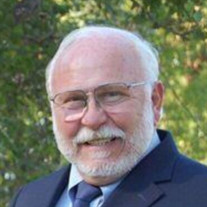 PANAMA CITY, Fla. – John Mack Wambo MD, age 83, of Panama City, FL, passed away peacefully on Friday afternoon, June 26, 2020. He was born on May 15, 1937, at Reid Memorial Hospital in Richmond, IN, to Herman Cecil Wambo and Vera Emma Catherine Wambo, who preceded him in death. Dr. Wambo graduated from Centerville High School as valedictorian and was the first graduate from there to attend college. He was accepted into the Pre-Med program at Indiana University. After graduation, he directly entered medical school - also at Indiana University. Upon earning his medical degree, he entered the U.S. Navy as an enlisted officer serving as ship's doctor on the USS Agerholm during the Vietnam Era. He received the Armed Forces Expeditionary Medal while serving in the U.S. Navy. After the Vietnam War he went on to specialize in the field of Obstetrics and Gynecology. At the completion of his internship in San Diego, CA, Dr. Wambo moved back to his hometown of Richmond to raise his family. He did so and practiced as an OB/GYN physician until 1983 at which time he and his family moved to Panama City so that he could enjoy boating, which was his passion outside of his work and family. He worked with his former Indiana University friend, Dr. Steven Smith until he went into private practice in 1986. Dr. Wambo practiced medicine in Panama City until he retired. He also served as Chief of Staff at Gulf Coast Medical Center in Bay County, FL, during the last part of his medical career. Dr. Wambo was a loved and respected member of both Wayne Co., IN, and Bay County, FL, with an unshakable Christian faith and was honored by serving his community, friends, and family on many levels. A few of his notable accolades were serving as County Corner in Wayne Co., IN, while continuing his OB/GYN practice during the last eight years he was there. He was awarded Sagamore of the Wabash - an award presented by the State Governor to exemplary citizens of Indiana who have contributed greatly to Hoosier heritage. Dr. Wambo met his first wife, Catherina “Loes” Kousbroek, while he was in the Navy. They were married in 1961. He loved her without end until her passing in November of 2005. Dr. Wambo met his loving wife Sheila in 2009. Sheila was his shining light and best friend until his passing. He is also survived by one son, Clay Wambo and wife Jessica Nash and her son Callan Neathawk; one daughter, Carissa Wambo Hosea and husband Tommy; three grandchildren, Savannah & Sarah Wambo and Jessica Hosea; stepchildren, Brandy Ramsey and husband John and Lauren Henley; step-grandchildren, Kaeleigh Starling, Olivia Ramsey, and Andrew Evans; and numerous cousins, nephews and nieces. Visitation for John Mack Wambo MD will be from 11:00 a.m. to 1:00 p.m. Tuesday, July 7, 2020, at Doan & Mills Funeral Home, 790 National Road West, Richmond, IN. Funeral service will follow at 1:00 p.m. Tuesday, July 7, 2020, at Doan & Mills Funeral Home with Pastor Chip Belanga officiating. The funeral will be recorded and available for viewing at www.doanmillsfuneralhome.com. Burial will be in Crown Hill Cemetery, Centerville, IN, with military honors provided by the Wayne County Honor Guard. Previously there was a visitation from 6:00 to 8:00 p.m. on Wednesday, July 1, 2020, at Southerland Event Center in Lynn Haven, FL. In lieu of flowers, memorial contributions may be made to Family Service Agency, 114 E. 9th Street, Panama City, FL 32401 or Covenant Care Hospice, 107 19th Street, Panama City, FL 32405, in memory of Dr. Wambo. Condolences may be sent to the family via the guest book at www.doanmillsfuneralhome.com.

The family of John Mack Wambo MD created this Life Tributes page to make it easy to share your memories.