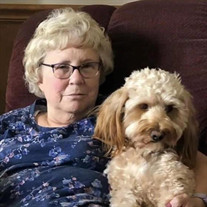 MODOC, Ind. – Jayne Hillman, age 66, of Modoc, Indiana, died Thursday, February 10, 2022, at AMG Specialty Hospital - Greenfield. Born June 20, 1955, in Richmond, Indiana, to David and Donna Kercheval Kelly, Jayne was a life-long resident of Wayne County, Indiana. She graduated from Richmond High School in 1973. Jayne retired from Walmart after 25 years, where she served in various positions and helped open the Richmond store. After retirement, Jayne worked at Ambassador Healthcare. Those who knew her, called her a spitfire. Jayne enjoyed being around people, including going out to eat with her friends and entertaining at her home. She loved her grandchildren dearly. Survivors include her husband of 40 years, Jerry Edward Hillman; daughter, Jenifer (Scott) Aselage of Huntertown, Indiana; grandchildren, Paige, Taylor, and Samantha; mother, Donna McKinley of Richmond; siblings, Mark (Zoie) Kelly and Carole (Joseph) Amendola, both of Florida; stepsiblings, Vicki (Terry) Adkins, Bobby Frasur, Ronnie (Shirley) Brown, and Charlie (Karen) Brown; nieces; nephews; cousins; and many friends, including her dog, Zoife. She was preceded in death by her father. Visitation for Jayne Hillman will be from 4:00 to 7:00 p.m. Monday, February 14, 2022, at Doan & Mills Funeral Home, 790 National Road West, Richmond. Funeral service will be held at 10:00 a.m. Tuesday, February 15, 2022, at Doan & Mills Funeral Home with Max Milton officiating. Burial will be in Economy Cemetery. Memorial contributions may be made to: Hagerstown High School’s Agricultural Department, c/o Nettle Creek Administration, 297 East Northmarket Street, Hagerstown, IN 47346. Condolences may be sent to the family via the guest book at www.doanmillsfuneralhome.com.

The family of Jayne Hillman created this Life Tributes page to make it easy to share your memories.