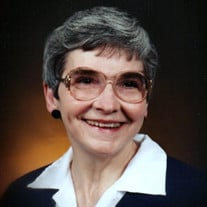 RICHMOND, Ind. – Janet Louise Hodgkin, age 86, of Richmond, Indiana, died Tuesday, April 6, 2021, at Ascension St. Vincent Fishers Hospital from complications from gallbladder surgery. Born February 10, 1935, in Montgomery County, Indiana, to Bruce and Lucille Williams, Janet lived in Indiana most of her life, the last 50 years in Richmond. She spent her life in the service of others. Janet supported her husband of 68 years, as the wife of a pastor and made a superb home for her husband, the Rev. Phillip Hodgkin, and her five children. Survivors include her husband; brother, Dr. Larry (Phyllis) Williams of New Castle, Indiana; children, Christina (David) Morrison of Sheridan, Wyoming, Dr. Mark (Donna) Hodgkin of Indianapolis, Indiana, Dr. Keith Hodgkin of Cookeville, Tennessee, and Ruth (Garry) Hartman of Richmond; five grandchildren; and five great-grandchildren. She was preceded in death by her parents; three brothers; sister; and son, Stephen Lee Hodgkin, who died in 1961 at the age of four. There will be a public calling for Janet Louise Hodgkin from 10:00 a.m. to 12:30 p.m. Saturday, April 10, 2021, in the Fellowship Room of First Baptist Church, 1601 South A Street, Richmond. A private family service will be held in the church sanctuary with Rev. Mark Wesler and Pastor Kevin Hay officiating. Burial will be in Earlham Cemetery. Arrangements are being handled by Doan & Mills Funeral Home, 790 National Road West, Richmond. Memorial contributions may be made to: First Baptist Church, 1601 South A Street, Richmond, IN 47374. Condolences may be sent to the family via the guest book at www.doanmillsfuneralhome.com.

The family of Janet Louise Hodgkin created this Life Tributes page to make it easy to share your memories.