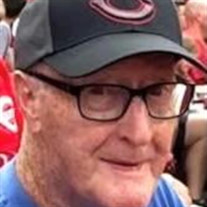 CENTERVILLE, Ind. – James F. Dreaden, age 74, of Centerville, Indiana, died unexpectedly, yet peacefully, Monday, December 14, 2020, at his home surrounded by his family after a courageous battle with Lewy Body Dementia. Born October 11, 1946, in Nashville, Tennessee, to Daniel and Victoria Porter Cannon, Jim lived in Wayne County, Indiana, most of his life. He was a 1965 graduate of Jefferson High School in New Paris, Ohio. Jim retired from Belden in 2010, after 43 years of service. He was an avid sports fan, who loved the Cincinnati Reds, Cincinnati Bengals, Indianapolis Colts, and his hometown Centerville Bulldogs. His favorite team, by far, would have to be any team he was watching from the sidelines when cheering on his children or grandchildren, as he was their biggest fan. Jim was a selfless man who worked hard and took pleasure in the simple things. He was an endless source of knowledge, having a great sense of humor and a kind soul. Jim took great pride in his family and said they were his greatest accomplishment. Survivors include his wife of 49 years, Judy C. Purcell Dreaden; daughters, Teresa (Jeff) Bowen of Richmond, Indiana, Vicki (Darrin) Dawes of Centerville, Jamie (Grant) Reece of New Madison, Ohio, and Mandi Waters of Centerville; grandchildren, Kristi (Cody) Dudley, Megan Alvey, Abbi (Daniel) Cox, Katie (RJ) Hampton, Ryan (Katie) Dawes, Camren and Carsen Munchel, and Lilly, Elly, Camilla, and Lane Waters; nine great-grandchildren; brother, William Dreaden of Richmond; nieces; nephews; cousins; and many friends. He was preceded in death by his beloved granddaughter, Sarah Mae Dawes; parents; and sister, Mayme Jurkat. A graveside service will be held at 2:00 p.m. Sunday, September 5, 2021, at Crown Hill Cemetery in Centerville with James’ nephew, David Riddle, officiating. Immediately following the service, family and friends are invited to Judy Dreaden’s home to enjoy a small meal together. Arrangements are being handled by Mills Funeral Home, 405 East Main Street, Centerville. Memorial contributions may be made to: Lewy Body Dementia Association, Inc., 912 Killian Hill Road S.W., Lilburn, GA 30047. Condolences may be sent to the family via the guest book at www.doanmillsfuneralhome.com.

The family of James F. Dreaden created this Life Tributes page to make it easy to share your memories.