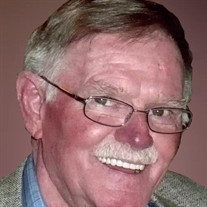 EATON, Ohio – Gerald A. “Jerry” Adams, age 84, formerly of Wayne County, Indiana, passed away Friday, May 28, 2021, at Reid Health. Born October 28, 1936, in Connersville, Indiana, to Wesley Handley and Inis May Bean Adams, Jerry graduated from Connersville High School in 1954. He worked as a farmhand before buying his first farm in 1965, followed by his second farm in the early 70s. Jerry loved farming, especially raising hogs and beef cattle. He also worked at Dana Corporation from 1965-1966. After retiring from farming in 1993, Jerry briefly worked at Farm Bureau and County Market. He retired from Cinram in Richmond in 2009. Jerry was a member of First United Methodist Church in Hagerstown, Indiana. He was also a member of the Hagerstown Young Farmers, Nettle Creek Lions Club, and Masonic Lodge and had served on the Nettle Creek School Board for 20 years. Jerry received several awards during his lifetime, including Star Farmer in 1966, the Good Neighbor Award in 1987, and the Distinguished Service Award in 1987. He enjoyed dancing, especially to 50s music. Survivors include his children, Mary (Allan) Irvin of Hagerstown, Indiana, Jerry Lee Adams of Phoenix, Arizona, and Susan Morton (Todd Robinson) of Hagerstown; grandchildren, Wes (Jill) Irvin, Crescinda (Lonnie) McClintock, Jacob (Amy) Adams, Sara Adams (Zach Rutherford), and Larry Morton; great-grandchildren, Lillian Irvin, Payton and Paxtyn Elsrod, Logan and Naomi Adams, and Mackenzie and Harper Rutherford; sister-in-law, Phyllis Adams of Brownsville, Indiana; brothers, Neil (Linda) Adams of Greens Fork, Indiana, and Herman (Gayle) Adams of Indianapolis, Indiana; several nieces and nephews; and many friends. He was preceded in death by his wife of 56 years, Nevada Eileen Kirkhart Adams, who died April 29, 2012; parents; sister, Lavon Adams; and brothers, Thomas and Ronnie Adams. A Celebration of Life for Gerald A. “Jerry” Adams will be announced by the family at a later date. Private burial will be in West Lawn Cemetery in Hagerstown. Arrangements are being handled by Doan & Mills Funeral Home, 790 National Road West, Richmond. Condolences may be sent to the family via the guest book at www.doanmillsfuneralhome.com.

The family of Gerald A. "Jerry" Adams created this Life Tributes page to make it easy to share your memories.