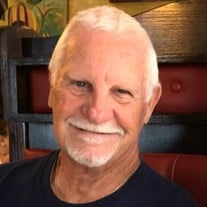 ALBANY, Ky. – Frank W. Eason, age 74, formerly of Richmond, Indiana, died Sunday, February 13, 2022, at The Medical Center at Albany. Born June 20, 1947, in Richmond, Indiana, to Stanley and Jewell Canter Eason, Frank lived in this community most of his life until moving to Kentucky in 2012. He was a 1965 graduate of Richmond High School and earned an associate degree in criminal justice from IU East in 1991. Frank was a deputy sheriff for 35 years with the Wayne County Sheriff’s Department, retiring in 2000. He loved being a cop, especially serving on the Wayne County Drug Task Force. Following his retirement, Frank worked security at the Wayne County Courthouse for eight years before retiring in 2012. He was a member of St. Andrew Catholic Church. Frank enjoyed fishing, boating, hunting, mowing his yard, and building anything, including pole barns, decks, and porches. He also loved eating cherry pie! Frank was an upstanding man, who would help anyone in need. He was the most wonderful man his wife ever knew, and he loved his family above all else. Survivors include his high school sweetheart and wife of 56 years, Sandra Kay “Sandy” Helms Eason; daughter, Julie (Tiffany) Eason of White House, Tennessee; son, Craig (Lori) Eason of Richmond; grandchildren, Rhesa (Chad) Wilkins of Russellville, Kentucky, Kiersten Freeman (Stephen Denny) of Monticello, Kentucky, Christopher Freeman (Wendy Friasllamas) of Evans, Georgia, and Cody, Kaleb, and Kade Sabados, all of Richmond; great-grandchildren, Anna Gale and Raylan Wilkins and Jude Denny; cousins; and many friends, including special friend, Richard “Dick” Helton of Richmond. He was preceded in death by his daughter, Lori Eason Freeman, and parents. Visitation for Frank W. Eason will be from 4:00 to 7:00 p.m. Sunday, February 20, 2022, at Doan & Mills Funeral Home, 790 National Road West, Richmond. Funeral service will be held at 11:00 a.m. Monday, February 21, 2022, at Doan & Mills Funeral Home with Fr. Sengole T. Gnanaraj officiating. Burial will be in Glen Haven Memorial Gardens. Memorial contributions may be made to: Susan G. Komen Breast Cancer Foundation, 3500 DePauw Blvd., Suite 2070, Indianapolis, IN 46268. Condolences may be sent to the family via the guest book at www.doanmillsfuneralhome.com.

The family of Frank W. Eason created this Life Tributes page to make it easy to share your memories.