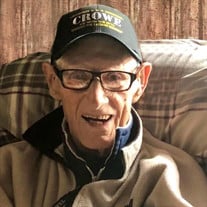 RICHMOND, Ind. – Frank L. Crowe, age 99, of Richmond, Indiana, passed away Thursday, March 3, 2022, at home surrounded by his family. Born January 12, 1923, in Centerville, Indiana, to Ernest and Ellen McKibbing Crowe, Frank was a life-long resident of Wayne County, Indiana. He served as a staff sergeant in the U.S. Army in the SW Pacific theatre during World War II, liberating the Philippines and was part of the first occupation force following the surrender of Japan. Frank retired from Wayne Works in 1984, where he worked as an industrial engineer for over 40 years. Frank was a connoisseur of the game of basketball. He attended the Milan State Championship in 1954 and watched Oscar Robertson lead Indianapolis Crispus Attucks to the State Championship in 1955 and 1956. Frank coached his children’s Little League teams and was an avid supporter of Centerville athletics, including following his children and grandchildren in their sporting events. He also had a great appreciation for track and field and attended numerous state track meets. Additionally, Frank liked watching the Indiana Pacers, IU and Butler basketball, the Indianapolis Colts, and the Indy 500. He enjoyed bowling and playing softball, along with competitive croquet matches in the backyard or a game of cards with his family and friends. Frank had a deep appreciation of nature and enjoyed hiking at state parks, visiting the Smoky Mountains, and making frequent trips to Branson, Missouri, as well. In his later years, he could often be found riding his scooter in the yard always picking up sticks and supervising the planting and harvesting of the family garden. Frank was very proud that his childhood homestead, referred to as “Ruby Road”, became a protected nature preserve for his family to enjoy in perpetuity. Frank was a member of Holy Family Catholic Church. He was also a lifelong member of the American Legion Harry Ray Post #65, VFW Kirk-Little Post 1108, YMI Club, UAW, Centerville Athletic Boosters, Whitewater Valley Land Trust, and Centerville Cemetery board and served on the Wayne County Honor Guard. Frank was blessed beyond measure by being able to spend his remaining years at home, thanks to his youngest son, Rick, who became his best friend and daily companion. NO WORDS can express how grateful our family is to Rick, who lovingly and unselfishly devoted the last 10 ½ years of his life to Dad’s care. Survivors include his five sons, Robert E. Crowe and his wife, Jama Mathewson Crowe, Ronald L. Crowe, Michael F. Crowe and his friend, Diane Fields, and Richard K. Crowe, all of Richmond and Randall L. Crowe and his wife, Kathy Williams Crowe, of Greens Fork, Indiana; two daughters, Kathleen A. Crowe McClain of Noblesville, Indiana, and Carol M. Crowe Britt and her husband, Mike, of Richmond; 15 grandchildren; 21 great-grandchildren; nieces; nephews; and many friends. He was preceded in death by his wife of 62 years, Marilyn Kathryn Rohe Crowe, who passed away September 3, 2011; son, Lawrence J. Crowe; great-granddaughter, Darrian Makenzie Dunnington; parents; and brothers, Kenneth and John Crowe. Visitation for Frank L. Crowe will be from 9:00 to 10:30 a.m. Monday, March 7, 2022, at Doan & Mills Funeral Home, 790 National Road West, Richmond. Liturgy of Christian Burial will follow at 11:00 a.m. Monday, March 7, 2022, at Holy Family Catholic Church, 815 West Main Street, Richmond with Fr. Sengole T. Gnanaraj officiating. Burial will be in Crown Hill Cemetery with military honors provided by the Wayne County Honor Guard. In lieu of flowers, memorial contributions may be made to: Seton Catholic Schools Scholarship Fund, 240 South 6th Street, Richmond, IN 47374 or Whitewater Valley Land Trust, Inc., 4910 Shoemaker Road, Centerville, IN 47330. Condolences may be sent to the family via the guest book at www.doanmillsfuneralhome.com.

The family of Frank L. Crowe created this Life Tributes page to make it easy to share your memories.