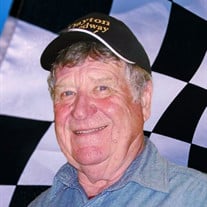 RICHMOND, Ind. - Every racer dreams of winning the "Big" one! On March 25th, 2021, Brent A. Whited, age 84, of Richmond, Indiana, fulfilled his dream, winning the last race, the best race, the biggest race of all peace, faith, and love into Heaven. Brent came into this world June 17th, 1936, to his proud parents, Robert "Ram" and Martha Jane Hahn Whited in Piqua, Ohio. After graduating high school, he immediately followed his father's footsteps into the racing world. During this time, Brent also met the love of his life, Carole Vogt, who he married on April 13th, 1957, and together brought four children into their world. Brent and Carole moved to Richmond from Piqua where he became a millwright for Dana Perfect Circle until his retirement. This didn't last long as Brent then became the Facility Supervisor at Winchester Speedway and worked until two weeks prior to his passing. Now to his racing career. Brent raced anything from go-karts, midgets, sprint cars, with wings, without wings, on dirt, on pavement, for money, for trophies, or trophies he swapped for money. Probably things he shouldn't have raced, but if it had an engine and four tires, it was ready. Brent won the 1970 Eldora Enterprise Sprint Car Rookie of the Year, 1970 Rookie of the Year IMCA Compact Sprint Cars, and 1980 Anderson Little 500 Rookie of the Year. He raced with USAC Sprint Cars and Silver Crown. Brent and Carole were lifetime members of the DARF (Dayton Auto Racing Fraternity) Fan Club. He was a long-time member of Williamsburg Masonic Lodge #493 and Tarum Shrine Club. Brent was a dedicated servant of St. Paul's Lutheran Church. Brent passed on his love of racing to his children, grandchildren, and great-grandchildren. Not only did he spend time with his family at the track, but he also loved watching his grandchildren and great-grandchildren's sporting events. Brent enjoyed spending quality time and sharing stories with family and friends. He knew no stranger and was warm and welcoming to everyone. Brent leaves behind his "A Swt Thing" Jackie Lopresti; three sons, Brent R. Whited, Brad (Mary) Whited, and Bryan (Joyce) Whited, all of Richmond; grandchildren, Brandon (Jessica) Whited, Matthew (Amanda) Whited, Jessica (Ronnie) West, Adam (Sarah) Whited, and Jeremy (Virginie) Whited; 13 great-grandchildren; several nieces and nephews; and many friends. He is preceded in death by his loving wife of 55 years, Carole Vogt Whited; daughter, Jani Whited; daughter-in-law, Sue Whited; grandson, Ian Michael Cox; parents; sister, Peg Miller; and brother, Bruce Whited. Visitation for Brent Whited will be from 5:00 to 8:00 p.m., Friday, April 2, 2021, at Doan and Mills Funeral Home, 790 National Road West, Richmond, with a Masonic Service at 7:45 p.m. Please plan to wear your own mask at the funeral home. Burial will be at the convenience of the family at Forest Hill Cemetery in Piqua, Ohio, with Pastor Chuck Miller officiating. In lieu of flowers, memorial contributions may be made to the Shriners Hospitals for Children, c/o Murat Shriners, 510 N. New Jersey Street, Indianapolis, IN 46204-1567 or USAC Benevolent Foundation for injured drivers, 124 E. Northfield Drive, Suite F #129, Brownsburg, IN 46112. Condolences may be sent to the family via the guest book at www.doanmillsfuneralhome.com.

RICHMOND, Ind. - Every racer dreams of winning the "Big" one! On March 25th, 2021, Brent A. Whited, age 84, of Richmond, Indiana, fulfilled his dream, winning the last race, the best race, the biggest race of all peace, faith, and love into... View Obituary & Service Information

The family of Brent A. Whited created this Life Tributes page to make it easy to share your memories.

RICHMOND, Ind. - Every racer dreams of winning the &quot;Big&quot; one!...