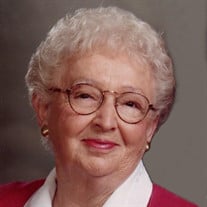 RICHMOND, Ind. – Berneil Baxter, age 95, of Richmond, Indiana, died Friday, October 16, 2020, at Friends Fellowship Community. Berneil was born on March 26, 1925, to Raymond and Flossie Ochsenrider Heller on their farm near Bluffton, Indiana, the middle of five children. An event that greatly influenced Berneil's life was the death of her beloved "Daddy" when she was ten years old. Following her father's death, Berneil lived in Bluffton for two years with two, dear aunts. She often remembered that period of her life as a happy time, in spite of the loss of her father, because of the love showered on her by her aunts. Her mother found work and family support in Marion, Indiana, and Berneil was reunited with her siblings and went to school there, graduating from Marion High School in 1943. During the last two years of World War II, Berneil left her home state and proudly served her country by working in the payroll office at Fort Leonard Wood in Missouri. She frequently spoke fondly of her time there, meeting people from all over the United States and dancing to the music of the big bands that came to entertain the troops. Her dance card was always full. Following the war, Berneil returned to Indiana and worked at the state employment office in Marion. Here she helped a local kid from Fairmount, Indiana, James Dean, prior to his acting career, apply for work that he didn't really want. In 1949, Berneil married Merrill William "Bill" Baxter in Reverend Murray Johnson's living room. They became members of his church, Marion First Friends, which was a focal point for the family's life for the first twenty years of their marriage. Berneil worked until their first child, Jeff, came along, followed soon by daughters, Jane and then Connie. A few years later, the arrival of their fourth child, Kent, added joy to the family. Berneil kept a clean house and a neatly mown lawn, perfected her home cooking, and took primary responsibility for raising the four children, all while encouraging Bill as he started Indiana's second equipment and tool rental business. It was during these years that she supported Bill, keeping the family and home together, as he volunteered tirelessly to help found Friends Fellowship Community, a Quaker retirement community. Once the children were established in school, Berneil returned to the workforce utilizing her secretarial skills, primarily in manufacturing settings. In 1971, she and Bill moved to Richmond, when he became employed as Administrator of Friends Fellowship Community. Berneil worked in the office at Richmond Industrial Supply Co., where she retired. Berneil faithfully volunteered on L6 at Reid Hospital every Monday for 26 years and was active in Kiwanianne Club. She was a member of Marion First Friends Church and had attended First Friends Meeting and Central United Methodist Church. Berneil enjoyed traveling, reading, cooking, and baking. Berneil taught her children, by example, to be kind, respectful, honest, and hardworking and to value family and education. She was the best pie baker and no family gathering happened without two or three of her famous sugar cream pies in attendance. Berneil was a beloved wife, mother, grandmother, and great-grandmother, and a good and loyal friend and neighbor to many. She will be dearly missed. Survivors include daughters, Martha Jane (Marshall) Akers of Indianapolis, Indiana, and Connie Jo (Greg Moschetti) Baxter of Dummerston, Vermont; sons, Jeffrey (Melissa) Baxter of Richmond and Kent (Dori) Baxter of Williamsburg, Indiana; many grandchildren; several great-grandchildren; brother, Keith Heller of Pennsylvania; nieces; nephews; cousins; and many friends. She was preceded in death by her husband, Merrill William Baxter, who died May 16, 2002; grandson, Mark Baxter; sisters, Maxine Truex Sanders and Arlene Rayle; and brother, Ardith Heller. Berneil's family wishes to express deepest gratitude to the compassionate and dedicated staff of Friends Fellowship Community, where she had lived since 1995, who provided excellent care and services to her. A private, family service will be held for Berneil Baxter. A memorial service will be announced by the family at a later date. Private burial will be in Earlham Cemetery. Arrangements are being handled by Doan & Mills Funeral Home, 790 National Road West, Richmond. It was Berneil's request that memorial contributions be made to: Friends Fellowship Community Endowment Fund, 2030 Chester Boulevard, Richmond, IN 47374. Condolences may be sent to the family via the guest book at www.doanmillsfuneralhome.com.

The family of Berneil Baxter created this Life Tributes page to make it easy to share your memories.