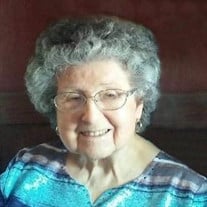 RICHMOND, Ind. - Barbara E. White, age 94, of Richmond, Indiana, died due to the coronavirus on Friday, December 25, 2020, at Reid Health. Born in 1926, near Milton, Indiana, to Howard and Ada Sharp Cook, Barbara was raised on the Cook family farm on Hiser Station Road. She attended school in Milton graduating in 1944. Growing up, Barbara was a member of 4-H and later a junior leader. She was also active in Indiana Rural Youth. Barbara's love of cooking was acquired early as she helped her mother and grandmother set out large tables of food for the threshing teams. Starting at an early age, Barbara perfected the art of making noodles, and they were everyone's favorite. She married Byron White in 1948, and they moved to Richmond in 1950, where they raised their family. After being widowed in 1976, Barbara followed her love of food preparation to work at Long's Deli. She then worked in Dietary at Friends Fellowship Community until her retirement. Until the age of 85, Barbara assisted her daughter at Jo's Greenhouse north of Richmond, where she enjoyed canning, freezing, and gardening. In later years when not able to cook, Barbara loved cookbooks, and her family read and discussed recipes with her until very recently. She enjoyed playing euchre and other card games. Barbara was a lover of cats and dogs and she is survived by her five furry companions. Survivors include her daughters, Marilyn White Assiff of Richmond, Marianne White Janney of Wilmington, North Carolina, and Jo White of Richmond; grandchildren, Hannah and Myrna Janney; sisters-in-law, Marjorie Johnstone of Richmond, Shirley White of Buena Park, California, and Marcia Conley of Knightstown, Indiana; nieces; nephews; cousins; and many friends. She was preceded in death by her husband of 28 years, Byron White; parents; and brothers, John H. and Garland P. Cook. Due to the current COVID-19 situation, we regret to inform you that services for Barbara E. White will be private with Al Bledsoe officiating. The service will be recorded and available on the Doan and Mills Funeral Home website. Burial will be in Zion's Lutheran Cemetery in Pershing, Indiana. A celebration of Barbara's life will be held in the future when the COVID-19 restrictions are lifted. Arrangements are being handled by Doan and Mills Funeral Home, 790 National Road West, Richmond. Memorial contributions may be made to: Help The Animals, Inc., P.O. Box 117, Richmond, Indiana 47374. Condolences may be sent to the family via the guest book at www.doanmillsfuneralhome.com.

RICHMOND, Ind. - Barbara E. White, age 94, of Richmond, Indiana, died due to the coronavirus on Friday, December 25, 2020, at Reid Health. Born in 1926, near Milton, Indiana, to Howard and Ada Sharp Cook, Barbara was raised on the Cook family... View Obituary & Service Information

The family of Barbara E. White created this Life Tributes page to make it easy to share your memories.