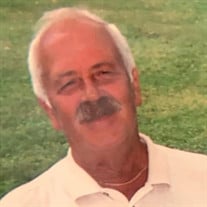 RICHMOND, Ind. – William A. “Bill” Smith, age 79, of Richmond, Indiana, died peacefully Sunday, March 20, 2022, at his home. Born March 6, 1943, in Richmond, Indiana, to Alfred and Elizabeth Sims Smith, Bill lived in this community his entire life. He retired as Director of Building & Grounds Maintenance for Wayne County after 18 years of service. Bill had also served on the Richmond Fire Department for over 30 years and previously worked at Berry Electric for many years. He was an avid golfer and a member of the Elks Country Club. Bill enjoyed traveling, playing cards with his friends, and making people laugh. He was known to his nieces and nephews as the “fun” uncle, who always had a unique nickname for each of them that made them feel so special. Survivors include his love, and faithful wife of 45 years, Terri Price Smith; daughter, Diane Smith Eaton of Richmond; three grandchildren; seven great-grandchildren; brothers, Elmer Wilmot of Richmond and Earl (Debby) Smith of Rockmart, Georgia; sister-in-law, Patricia (Gordon) Moore of Richmond; several nieces and nephews; and many friends. He was preceded in death by his parents; sister, Janice Hunt; and brother, Charles Glenn Smith. Visitation for William A. “Bill” Smith will be from 5:00 to 8:00 p.m. Friday, March 25, 2022, at Doan & Mills Funeral Home, 790 National Road West, Richmond. Funeral service will be held at 11:00 a.m. Saturday, March 26, 2022, at Doan & Mills Funeral Home with his niece, Pastor Jennifer Stonebraker, officiating. Burial will be in Earlham Cemetery. Memorial contributions may be made to: First Tee Indiana in Richmond, c/o Richmond Parks and Recreation, 2200 East Main Street, Richmond, IN 47374. Condolences may be sent to the family via the guest book at www.doanmillsfuneralhome.com.

The family of William A. "Billy" Smith created this Life Tributes page to make it easy to share your memories.