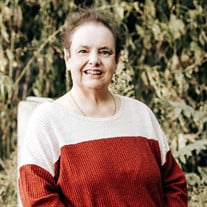 CENTERVILLE, Ind. – Veldeanie “Vel” Hampton, age 67, of Centerville, Indiana, went home to be with Jesus and be reunited with her son on Thursday, March 3, 2022, at Reid Health. Born January 27, 1955, in Richmond, Indiana, to Lorene Raby, Vel was a life-long resident of this community. She graduated from Centerville High School in 1973 and earned a bachelor's degree in social work from IU East. Vel worked in the retail industry. However, the job she was most passionate about was being a professional grandma. Vel enjoyed attending her grandchildren’s sporting and school events and shopping for them. She was a member of Centerville United Methodist Church. Vel had close and personal relationship with Jesus, who without a doubt welcomed her home, and she loved reading her Bible. Vel also enjoyed family gatherings and listening to Christian music. Survivors include her daughter, Vicki (Joe) Crowe of Winchester, Kentucky; daughter-in-law, Cheryl Hampton of Liberty, Indiana; bonus son, Brandon Knapp of Indianapolis, Indiana; grandchildren, Rylie, Brady, Matthew Jr., Abby, and Alexys; brother, Thomas Raby of Centerville; cousins, including special cousins, Kay Wilkerson of New Trenton, Indiana, and Anita Cracher of Missouri; and many friends. She was preceded in death by her son, Matthew Hampton Sr; mother; and ex-husband, Michael Hampton. Visitation for Veldeanie “Vel” Hampton will be from 5:00 to 7:00 p.m. Monday, March 7, 2022, at Doan & Mills Funeral Home, 790 National Road West, Richmond. There will be a private graveside service. Burial will be in Bentonville Cemetery. Condolences may be sent to the family via the guest book at www.doanmillsfuneralhome.com.

The family of Veldeanie "Vel" Hampton created this Life Tributes page to make it easy to share your memories.