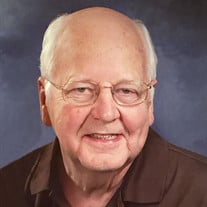 RICHMOND, Ind. - On February 17th, 2021, Jesus welcomed home Tom Jesse Barker, where he was reunited with his son, Curt, and his brother and best friend, Dutch. Tom was born August 6th, 1937, to Garland and Dicie Barker and raised on a small farm in Bethel, Indiana. He was the youngest of the six ornery Barker boys. Before graduating from Whitewater High School, he met the love of his life, Marilyn Thompson. They were married later that year. Sharing 66 years of marriage, they created a love story that most people dream about, ending every night with Tom telling his sweetheart “I love you, always have and always will.” Tom proudly served the Richmond Fire Department for 22 years, retiring in 1982 as the youngest Battalion Chief to rise through the ranks at that time. He also had a second career as a realtor. Tom was manager of Lingle Real Estate holding designations of GRI, CRI, CRS, and CRB. He served as President of the Richmond Board of Realtors and was named Realtor of the Year in 1988. Tom was a member of St. Paul’s Lutheran Church. He was active in many community organizations including the Red Cross, United Way, Home Builder’s Association, Yokefellow, and Richmond and Centerville Lion’s Club. Upon retirement from real estate, he and Marilyn enjoyed many winters at their second home in Lakeland, Florida, where they made numerous special friends. They traveled extensively and took multitudes of photos of the wonderful places they visited, with Alaska among his favorites. Tom’s family was his first and favorite pastime, finding any reason to share time whether it was a spontaneous pizza night, gathering at a ballpark to watch a grandchild’s game, or a holiday turkey fry. Every moment was cherished. The family has a gratitude of thanks for our 18 bonus years possible because of the tremendous care from Richmond Cardiology and his buddy, Dr. Fleming. Survivors include his wife of 66 years, Marilyn J. Thompson Barker; daughters, Robin (Tim) Hill of Lynn, Indiana, and Shelley (Joe) Miller of Richmond; grandchildren, Jeramiah (Kelli) Taylor of Richmond, Jessi (Aron) Sweet of Centerville, Indiana, Matthew Barker of San Diego, California, Jake (Candi) Taylor-Hill of New Paris, Ohio, Jenna (Brandon) Wilson of Powhatan, Virginia, Samantha (John) Purcell of Richmond, and Kristofer (Madi Pearson) Miller of Noblesville, Indiana; great-grandchildren, Austin Taylor, Jade Hill (Nigel Vance), Taygan Dalbey, Wes Taylor, Olivia Taylor, Kenley Adams, Brady Sweet, Ezra Wilson, Kainen Taylor-Hill, Peyton Wilson, and Lainey Taylor-Hill; others embraced as his own, Chris Bane, Ann Cottongim, Robin Henry, and Cathy Hayes; brothers-in-law, Donnie (Pat) Thompson and Ronnie (Betty) Thompson; sister-in-law, Patsy Thompson; and many other family and friends. He was preceded in death by his son, Curt Allen Barker; daughter-in-law, Lori Barrier-Barker; parents; brothers, Robert, James, Harrison, Jack, and Doug; and in-laws, Harlan and Mary Thompson. A Celebration of Life for Tom Jesse Barker will be held at 2:00 p.m. Saturday, May 8, 2021, at St. Paul's Lutheran Church with Rev. Cliff Nunn officiating. Following the service, the Richmond Fire Department will lead a procession to Earlham Cemetery. Arrangements are being handled by Doan &Mills Funeral Home, 790 National Road West, Richmond. Memorial contributions may be made to the Wayne County Foundation - Barker Family Fund, 33 South 7th Street, Suite 1, Richmond, IN 47374 or St. Paul’s Lutheran Church, 121 South 18th Street, Richmond, IN 47374. Condolences may be sent to the family via the guest book at www.doanmillsfuneralhome.com.

RICHMOND, Ind. - On February 17th, 2021, Jesus welcomed home Tom Jesse Barker, where he was reunited with his son, Curt, and his brother and best friend, Dutch. Tom was born August 6th, 1937, to Garland and Dicie Barker and raised on a small... View Obituary & Service Information

The family of Tom J. Barker created this Life Tributes page to make it easy to share your memories.