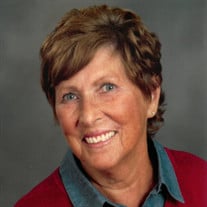 CENTERVILLE, Ind. - Sonia Spencer, age 83, of Centerville, Indiana, died Wednesday, February 2, 2022. Born May 25, 1938, in Washington, Indiana, to Lawrence F. and Lenora Chadd Sewell, Sonia lived in Centerville most of her life. She was a 1956 graduate of Richmond High School. Sonia studied art at Santa Monica City College in 1958, attended IU East, and was a part of the Ivy Tech Community College Association of Accounting. She was a data processor for Douglas Aircraft Company and worked as a clerk at Belden, Avco, and INA. Sonia left her working career to become a beloved wife, mother, friend, and community member. Those close to Sonia will remember her as someone who was always willing to help when needed; she baked pies for the Lion’s Club Fish Fry, repaired the wardrobe malfunctions that only a seamstress of her caliber could tackle, kept friends and family company at times when they most needed it, helped raise her grandchildren by doting on them, and helped choose which purse went best with the shoes on those all too necessary shopping trips. Sonia loved her family. She devoted her life to ensuring her boys were raised well. Sonia brought her love of her family to their extended families and friends, welcoming all into her home. She was even willing to do laundry for those who just happened to bring it along with them during their visits. Later in life, Sonia worked in several area clothing boutiques to satisfy her love of fashion (the discounts were not bad either), and it was where she made many lifelong friends. Within the community, Sonia was a member of Centerville United Methodist Church and Psi Iota Xi Sorority, where she could be found every Christmas raising money by making and selling cheese balls. Sonia was a delight to all who had the privilege to know her. Survivors include her sons, Shawn Spencer of Little Rock, Arkansas, Chad (Laurel) Spencer of Glencoe, Illinois, and Brent (Stacy) Spencer of Pompano Beach, Florida; grandchildren, Christopher, Henry, and Gertie Spencer; brother, Chadd Sewell of Fort Collins, Colorado; nieces, nephews, cousins, and many friends. She was preceded in death by her beloved husband of 51 years, P. Allan Spencer, who died November 5, 2014, and parents. Visitation for Sonia Spencer will be from 1:00 to 4:00 p.m. Sunday, February 13, 2022, at Doan & Mills Funeral Home, 790 National Road West, Richmond. An additional visitation will take place from 10:00 to 11:00 a.m. Monday, February 14, 2022, at Centerville United Methodist Church, 112 South Morton Avenue, Centerville. Funeral service will follow at 11:00 a.m. Monday, February 14, 2022, at the church with Pastor Ted Chalk officiating. Burial will be in Crown Hill Cemetery. Memorial contributions may be made to: Centerville-Abington Senior Center, 111 South 2nd Street, Centerville, IN 47330. Condolences may be sent to the family via the guest book at www.doanmillsfuneralhome.com.

CENTERVILLE, Ind. - Sonia Spencer, age 83, of Centerville, Indiana, died Wednesday, February 2, 2022. Born May 25, 1938, in Washington, Indiana, to Lawrence F. and Lenora Chadd Sewell, Sonia lived in Centerville most of her life. She was a... View Obituary & Service Information

The family of Sonia Spencer created this Life Tributes page to make it easy to share your memories.