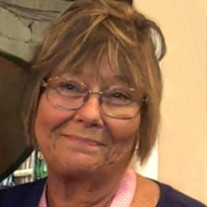 RICHMOND, Ind. - Sherry Lynn Study, age 70, of Richmond passed unexpectedly at Reid Health on Sunday, March 21, 2021. Ms. Study was born April 19, 1950, in Bloomington, Indiana, to John H. and Jean Arnett Pemberton. She was a long-time resident of Wayne County where she raised her children. Sherry graduated from Ball State University with a Master's in Education. She taught at Sylvan Learning Center and Green Acres. Sherry was also a special education teacher for Richmond Community Schools and a substitute teacher for Centerville-Abington Community Schools. During her career she was known as "Mama Study" by the students and her children's friends. Sherry had a devotion to animals, especially cats, and had a large collection of cat memorabilia. She was a member of First United Methodist Church. Sherry was a devoted grandmother to her four grandchildren. She will be dearly missed by her family and many friends. She is survived by her daughters, Kristi (Jerry) Nichols and Katie (Santhosh Krishnamoorthi) Study, both of Indianapolis, Indiana; daughter-in-law, Kristina (Jason) Study of Fredericksburg, Virginia; grandchildren, Brady and Madison Nichols and Benjamin and Amelia Study; and numerous nieces, nephews, cousins, and friends, including her pen pal since her school days, Madeline (United Kingdom). She was preceded in death by her son, Jason Study and her parents. A Celebration of Life will be announced by the family at a later date. Arrangements are being handled by Doan and Mills Funeral Home, 790 National Road West, Richmond. In honor of Sherry's love of animals, the family requests that memorial contributions be made to local animal shelters or an animal rescue of the donor's choice. Condolences may be sent to the family via the guest book at www.doanmillsfuneralhome.com.

The family of Sherry Lynn Study created this Life Tributes page to make it easy to share your memories.