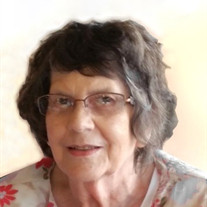 RICHMOND, Ind. - Ruth French, age 80, of Richmond, Indiana, died Tuesday, March 24, 2020, at Reid Health. Ruth was born on August 20, 1939, in Noblesville, Indiana, to Lucian and Ardella Mortimer Palmer. She graduated from Ball State University with a bachelor's degree and then a master's degree in education. Ruth spent much of the early part of her employment career as a teacher for Richmond Community Schools and then as a librarian for the Northeastern School District. In 1970, Ruth accepted Jesus Christ as her personal savior and devoted the rest of her life to her Christian faith. She wrote and published a book of original poetry entitled "Redeemed Ultimately Through Him", founded and was one of the original co-owners of the Trinity Shoppe (later renamed Trinity Gifts and Books), as well as hosted a local Christian radio program. In addition, Ruth served as pastor of Good Shepherd Fellowship in Economy, Indiana. Later, she taught at Dayton Bible College, Elim Bible College in New York, and Indiana University East. Ruth also worked at Trinity Broadcasting Network. She was a member of Living Word Christian Fellowship, where she taught Bible lessons and wrote articles for the church's newsletter. Ruth was an avid reader and enjoyed keeping her mind active by doing crossword and sudoku puzzles. She also enjoyed the oceans and spending time with her dogs and cats. Ruth is survived by her two children, Deborah (Mike) Simpson of Owasso, Oklahoma, and Michael (Bo) French of Richmond; siblings, Phillip Palmer of Arizona, Joe (Donna) Palmer of Indianapolis, Indiana, Barbara (Bob) McGimpsy of Kokomo, Indiana, and Wilma Palmer of Chapel Hill, North Carolina; six grandchildren; seven great-grandchildren; and numerous nieces and nephews. She was preceded in death by her parents and one brother, David Palmer. Due to the COVID-19 virus, there was no public calling or funeral. Ruth was buried in Noblesville, Indiana. The family may have a private memorial service at a later date. Arrangements were handled by Doan and Mills Funeral Home, 790 National Road West, Richmond. Condolences may be sent to the family via the guest book at www.doanmillsfuneralhome.com.

The family of Ruth French created this Life Tributes page to make it easy to share your memories.