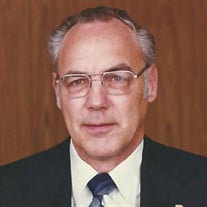 RICHMOND, Ind. – Russell Howard Ferris, age 95, of Richmond, Indiana, died Tuesday, August 4, 2020, at Friends Fellowship Community. Born June 20, 1925, in Omaha, Nebraska, to Ross and Ethel Ferris, Russell lived in Richmond for 21 years. Prior to moving to Richmond, he lived in Amelia Island, Florida, where he was a member of the Turtle Patrol. Russell walked the beaches daily, on the lookout for endangered sea turtles coming ashore to lay their eggs. He enjoyed deep sea fishing, reading, and spending time with his wife, Marian. Upon moving to Richmond, Russell joined First English Lutheran Church, singing in the choir and taking part in numerous Bible studies. Earlier in his life, Russell embellished his age in order to join the military. He was a First Lieutenant in the Army Air Corp at Bergstrom Field in Austin, Texas, where he flew enormous C-46 transport planes to ferry wounded troops from coast to coast, taking the patients to hospitals closer to their homes. After the war, Russell and Marian married in August of 1946 and moved to Omaha, Nebraska, where he enrolled in Creighton University and earned his business degree. Russell worked for Allstate Insurance for 35 years. Russell’s date of death was his 74th wedding anniversary. He and Marian enjoyed a loving, happy marriage; Marian took excellent care of Russell as his Alzheimer’s progressed, enabling him to stay at home much longer than anyone anticipated. Survivors include his sons, Scott Ferris of Sanford, Florida, and Lee (LuLayne) Ferris of Lubbock, Texas; daughters, Leslie (Mark) Lecklider of Indianapolis, Indiana, and Linda Miller of Indian Land, South Carolina; eight grandchildren; two great-grandchildren; nieces; nephews; cousins; and many friends. Russell was preceded in death by his beloved wife, Marian; parents; and brother, Stan. The family would like to thank the staff of Friends Fellowship Community for the loving care they provided Russell as his illness progressed. A private entombment for Russell will be held in the First English Lutheran Church Columbarium at a later date. Memorial contributions may be made to: First English Lutheran Church, 2727 East Main Street, Richmond, IN 47374 or Friends Fellowship Community for the Endowment Fund, 2030 Chester Boulevard, Richmond, IN 47374. Condolences may be sent to the family via the guest book at www.doanmillsfuneralhome.com.

The family of Russell Howard Ferris created this Life Tributes page to make it easy to share your memories.