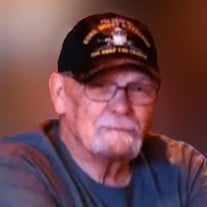 RICHMOND, Ind. - Roger G. Stinson, age 78, of Richmond, Indiana, died Friday, May 13, 2022, at his home. Born March 8, 1944, in Soldier, Kentucky, to Curtis and Opal Kegley Stinson, Roger lived in Wayne County, Indiana, most of his life. He served in the U.S. Army from 1959-1962. Roger was Vice President of Veterans Council in Richmond, a proud member of the American Legion Post #777, and a volunteer for the American Legion Harry Ray Post #65. He had been involved in local veterans and patriotic efforts, including the Wayne County Veterans Memorial Park committee, coordinating the city's Avenue of Flags project and collecting for the Wounded Troop Relief Fund to help soldiers wounded in Iraq. Roger worked for Wayne Works. He enjoyed golfing, gardening, especially growing tomatoes, and spending time with his grandchildren. Survivors include his sons, Brian Stinson, Randy (Marlowe) Stinson, and Ralph (Ashley) Stinson; grandchildren, Jennifer, Kurtis, Elizabeth, Autumn, Sherina, Riley, and Avery; six great-grandchildren; nieces; nephews; cousins; and many friends. He was preceded in death by his parents; five sisters; and four brothers. Visitation for Roger G. Stinson will be from 12:00 to 2:00 p.m. Thursday, May 19, 2022, at Doan & Mills Funeral Home, 790 National Road West, Richmond. Funeral service will follow at 2:00 p.m. Thursday, May 19, 2022, at Doan & Mills Funeral Home. Burial will be in Earlham Cemetery's Veteran's Field of Honor with military honors provided by the Wayne County Honor Guard. Memorial contributions may be made to: Wayne County Veterans Memorial Committee, Inc., P.O. Box 2401, Richmond, IN 47375. Condolences may be sent to the family via the guest book at www.doanmillsfuneralhome.com.

The family of Roger G. Stinson created this Life Tributes page to make it easy to share your memories.