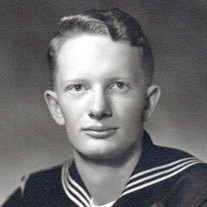 RICHMOND, Ind. – Robert H. Woodhurst, age 95, of Richmond, Indiana, died Saturday, January 9, 2021, at his home surrounded by his family. Born November 2, 1925, in Denver, Colorado, to Morris E. and Alfreda Harlan Woodhurst, Robert moved to Richmond in 1934. He was a graduate of Richmond High School. Robert proudly served in the U.S. Navy during World War II. He retired from Natco in 1987, after working as a tool designer for 27 years. Robert was a former member of Webb Lodge No. 24, F. & A.M. and Eastern Star Loyal Chapter #49. He was an avid sports fan and enjoyed camping, fishing, and hiking. Robert loved his family and enjoyed spending time with them. Survivors include his son, Robert (Eva) Woodhurst II of Richmond; daughter, Tamara L. Osburn of California; stepdaughters-in-law, Juanita Wilburn and Geraldine Wilburn; grandchildren, Tamra, William, Jarrod, Christie, and Jordan; five great-grandchildren; several step-grandchildren and step-great-grandchildren; several step-nieces and step-nephews; cousins; and many friends. He was preceded in death by his wife of 44 years, Opal A. Woodhurst, who died May 16, 2008; two stepsons; two step-grandchildren; and parents. Due to the current COVID-19 situation, we regret to inform you that services for Robert H. Woodhurst will be private with Deacon Jim Miller officiating. A Masonic Service will be included. Entombment will be held in the Earlham Memorial Mausoleum with military honors provided by the Wayne County Honor Guard. Arrangements are being handled by Doan & Mills Funeral Home, 790 National Road West, Richmond. Condolences may be sent to the family via the guest book at www.doanmillsfuneralhome.com.

The family of Robert H. Woodhurst created this Life Tributes page to make it easy to share your memories.