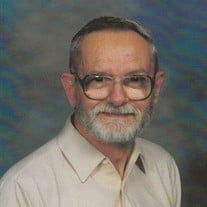 RICHMOND, Ind. - Robert McCullough Vetter, age 93, of Richmond, Indiana, died Saturday, December 12, 2020, at Ambassador Healthcare. Robert was born August 31, 1927, in Baltimore, Maryland, to Herbert F. and Kathleen W. Wilson Vetter. He graduated from Forest Park High School in Baltimore. Robert came to Richmond around 1960 and attended Earlham College. He taught at the Quaker School where he met his future wife, Virginia, who was one of his students. Robert then went to work as a Social Worker for the Wayne County Welfare Department. After that he was a security guard at various places. Robert was a member of the Eastern Indiana Gem and Geological Society (EIGGS), the Rock and Gem Club, where he had served as an officer. Robert attended First Friends Meeting. He loved to read, work in his vegetable garden, and spend time with his siblings and their families around the country. Survivors include his "daughter", Catherine Vetter; many nieces and nephews, Paul Helewicz, Carol Cavey-Ross, and Jayne, Joan, Tom, James, Kathleen, Donald, Douglas, David, Kevan, and Allison Vetter; and sisters-in-law, Jean Vetter of Oregon and Margaret Vetter of Maryland. He was preceded in death by his parents; sisters, Minnie Cavey and Muriel Helewicz; twin brother, Ernest Vetter; and brothers, Herbert Jr., Walter, and Donald Vetter. Due to the current COVID-19 situation, we regret to inform you that the graveside service for Robert McCullough Vetter will be private with Doug Gwyn officiating. Burial will be in Earlham Cemetery. Arrangements are being handled by Doan and Mills Funeral Home, 790 National Road West, Richmond. Memorial contributions may be made to: First Friends Meeting, 2010 Chester Boulevard, Richmond, IN 47374 or EIGGS, P.O. Box 1724, Richmond, IN 47375. Condolences may be sent to the family via the guest book at www.doanmillsfuneralhome.com.

The family of Robert M. Vetter created this Life Tributes page to make it easy to share your memories.