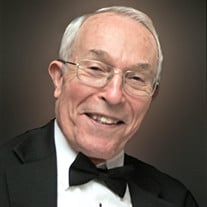 RICHMOND, Ind. – The Honorable Robert L. Reinke, age 87, of Richmond, Indiana, died January 26, 2021, at his home surrounded by his family. Born February 28, 1933, in South Bend, Indiana, to William and Eva Hein Reinke, Bob graduated from South Bend Adams High School in 1951 and was a 1955 graduate of Wabash College and a 1958 graduate of the University of Chicago Law School. He moved to Richmond from Chicago in 1958. During his career, Bob served as City Attorney for Richmond in the late 1970s and presided over Superior Court 2 of Wayne County from 1982 to 1996. Bob was a member of Central United Methodist Church and a former member of the Y’s Men Club. He was a board member of the Wayne County Foundation, serving as board chair from 2001 to 2003. In 2018, Bob received the Richard O. Ristine Award given by the Pre-Law Society of Wabash College for establishing the Reinke Brothers Endowed Law Fund along with his brother, William “Bill” Reinke. He was also awarded the Sagamore of the Wabash Award by Governor Frank O’Bannon in 1997. Bob was considered to be a scholar of the law and was well regarded by his peers for his exacting standards in the courtroom and ruling in a well-considered and precise way. He was also skilled at explaining a complicated topic in an understandable way. Bob enjoyed lively political discourse around the family dinner table, reading, solving word puzzles, and traveling around the world as well as closer to home, including family trips to Brown County, Indiana. He loved spending time with his family and friends. Survivors include his wife of 16 years Toni Meredith Reinke; daughters Ann Reinke of Milwaukee, Wisconsin, and Karen Reinke of Springfield, Illinois; sons Kurt (Cat) Reinke of Tucson, Arizona, and Mark (Lisa) Reinke of Indianapolis, Indiana; stepdaughters Anne (John) Dalton of Richmond and Emily (Tim Young) Meredith of Seattle, Washington; stepson John (Gayla) Meredith of Richmond; grandchildren and step-grandchildren Emily (J.B.) Mclellan, Ashley (Kenny) Hawk, Alyssa Reinke, John Lucey, Helen (Gianni Vissat) Lucey, Madeline and Hanora Lucey, Julia and Luke Reinke, Alexa Pressley, Trisha Meredith, Thomas (Julie) Meredith, Hannah (Jason) Wright, and Meredith Young; great-grandchildren and step-great-grandchildren Fiona Mclellan, Kennedy Hawk, Natalie, Stella, and Lena Meredith, and Elise, Jonathon, and Annabelle Wright; brother William J. (Elizabeth) Reinke; niece Sally (Craig) Taelman; nephew Andrew Reinke; and many friends. He was preceded in death by his first wife of almost 50 years Julia “Judy” Blue Reinke, who passed in 2004; parents; and nephew William A. (Pam) Reinke. The family would like to thank the amazing caregivers from Synergy HomeCare, especially Skylar and Amanda. Due to the current COVID-19 situation, services for the Honorable Robert L. Reinke will be private with Rev. Jen Huff officiating. The funeral service will be livestreamed at 2:00 p.m. Sunday, January 31, 2021, at https://www.facebook.com/RichmondCUMC and a recording of the service will be available on the Doan & Mills website. Burial will be in Earlham Cemetery. The family will hold a joyous remembrance of Bob’s extraordinary life and career in the fall and look forward to seeing all of Bob and Toni’s many friends at that time. Arrangements are being handled by Doan & Mills Funeral Home, 790 National Road West, Richmond. In lieu of flowers, memorial contributions may be made to the Wayne County Foundation for the Robert L. and Toni L. Reinke Fund in memory of Robert L. Reinke. Gifts may be made online at www.waynecountyfoundation.org or by mail: Wayne County Foundation, 33 South 7th Street, Richmond, IN 47374. Condolences may be sent to the family via the guest book at www.doanmillsfuneralhome.com.

The family of Robert L. Reinke created this Life Tributes page to make it easy to share your memories.