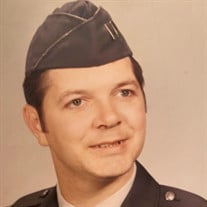 RICHMOND, Ind. – Robert L. Bond, age 78, of Richmond, Indiana, died Tuesday, December 8, 2020, at Ambassador Healthcare. Robert was born October 18, 1942, in Connersville, Indiana, to Jimmy T. and June Coats Bond. He graduated from Union County High School in 1960 and was a 1965 graduate of Indiana University. Robert proudly served in the United States Air Force, including two tours of duty during the Vietnam War and one tour of duty during Operation Desert Storm. He earned the rank of Lieutenant Colonel before retiring. Robert was a brother of Mason Liberty Lodge #58, F. & A.M. for 57 years, a member of American Legion Post 122 in Liberty for 51 years, and a life member of the Liberty VFW. Survivors include his daughter, Michelle R. Bond of Richmond; son, James L. (Alyssa) Bond; grandchildren, Kevin Tincher II, Ayla Tincher, Evelyn Bond, and Alex Bond; great-grandchildren, Brycen, Blayke, and Zayden Tincher; nieces; nephews; cousins; and many friends, including the mother of his children, Billie Jewel Rheuble. He was preceded in death by his daughter, Terri Bond; parents; and sister, Madaline Bond Fields. A memorial service for Robert L. Bond will be held at a later date. Burial with military honors will be in Dunlapsville Cemetery in Liberty. Arrangements are being handled by Doan & Mills Funeral Home, 790 National Road West, Richmond. Memorial contributions may be made to: American Legion Post 122, 4 West High Street, Liberty, IN 47353 or VFW, 123 East Westcott Street, Liberty, IN 47353. Condolences may be sent to the family via the guest book at www.doanmillsfuneralhome.com.

The family of Robert L. Bond created this Life Tributes page to make it easy to share your memories.