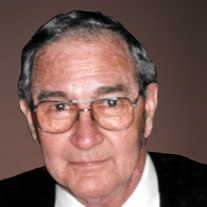 RICHMOND, Ind. - Richard Elwood "Jeff" Jeffers, age 89, of Richmond, Indiana, died unexpectedly Friday, November 20, 2020, at his home. Jeff was born November 27, 1930, in Glencoe, Ohio, to Joseph E. and Pauline Holiday Jeffers. He came to Richmond in 1948 seeking employment at the age of 18. Jeff worked at Wallace Metal Products, where he worked his way up to General Manager. In 1970, Jeff and two partners opened their own business, the Carlos Casket Company in Carlos, Indiana. In 1976, he purchased J.M. Hutton Company, and in 1984, he expanded the company with the purchase of the former Wallace Metal Products building. A former Wallace CEO stated, "Jeff purchased an acorn and grew it to be a mighty oak tree!" Jeff made a huge impact on this community. He learned early in life that he should leave this world in a better place than he found it. Jeff achieved that goal throughout his career. He firmly believed in educating our youth and helping guide them into the future. As a philanthropist, Jeff made many contributions to organizations and foundations; he was most proud to be a part of the Boys and Girls Clubs of Wayne County. Survivors include his children, Rick (Marianne) Jeffers of Florida and Nanette Elmore, Anita (Steve) McVay, Laura (Steve) Turner, Mark (Brenda) Jeffers, and Julianna Jeffers, all of Richmond; son-in-law, John Mendenhall of Richmond; grandchildren, Amy Jeffers, Kelly Jeffers, Christopher Elmore, Robert Elmore, Angela Elmore, Kyle Mendenhall, Katie Mendenhall, Jessica McVay, Leah McVay, Adrienne Turner, Mark Day, and Zach Day; many great-grandchildren; sisters, Elaine McClaren and Marilyn Holland; brother, Jim Jeffers; nieces; nephews; cousins; and many friends including the mother of his children, Mary Jo Jeffers of Richmond. He was preceded in death by his daughter, Jana R. Mendenhall; grandson, Stephen Turner; parents; sister, Pauline Ross; and brothers, Paul, Roger, Frank, David, Robert, and Howard Jeffers. Due to the current COVID-19 situation, we regret to inform you that services for Richard Elwood "Jeff" Jeffers will be private with Bruce Daggy officiating. The service will be recorded and available on the Doan and Mills Funeral Home website. Burial will be in Earlham Cemetery. A celebration of Jeff's life will be held in the future when the COVID-19 restrictions are lifted. Arrangements are being handled by Doan and Mills Funeral Home, 790 National Road West, Richmond. Memorial contributions may be made to: Boys and Girls Clubs of Wayne County, 1717 South L Street, Richmond, IN 47374. Condolences may be sent to the family via the guest book at www.doanmillsfuneralhome.com.

The family of Richard Elwood "Jeff" Jeffers created this Life Tributes page to make it easy to share your memories.