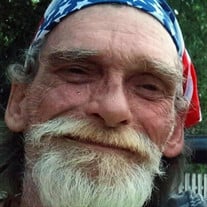 RICHMOND, Ind. – Randy Lee Faucett, age 64, of Richmond, Indiana, died Tuesday, October 27, 2020, at his home. Randy was born on February 23, 1956, in Richmond, Indiana, to Robert G. and Jeanie Lang Faucett. His father later remarried, and Lorraine Ketron Faucett became a mom to him for more than 50 years. Randy was a 1974 graduate of Richmond High School, where he was one of the top cross country and track runners. Randy served in the U.S. Navy. Afterwards, he returned to Richmond and worked for many local manufacturers. Randy was a very friendly guy, who was known by everyone. He had the best heart and would do anything for anyone. Survivors include his fiancée, Heidi Pugh and her daughters, Samantha and Holly; daughters, Brianna Faucett, Deann Faucett, and Angela Ballard, all of Richmond; son, Chad Williamson; former wife, JoEllen Crawley and her four children, Sasha Duke of San Antonio, Texas, and Maranda Crawley, Amber Crawley, and Keith Voiles, all of Richmond, whom he considered his own; 26 grandchildren; sisters, Diane (Derek) DeSonie of Richmond and Kelley (Terry) Faucett-Malone of Terre Haute, Indiana; brother, Keith (Tammy) Bennett of Hampshire, Illinois; nieces; nephews; cousins; and many friends. He was preceded in death by his parents. Graveside service for Randy Lee Faucett will be held at 11:00 a.m. Monday, November 2, 2020, at King Cemetery. Please plan to wear your own mask at the cemetery. Arrangements are being handled by Doan & Mills Funeral Home, 790 National Road West, Richmond. Memorial contributions may be made to: Help The Animals, Inc., P.O. Box 117, Richmond, IN 47375. Condolences may be sent to the family via the guest book at www.doanmillsfuneralhome.com.

The family of Randy Lee Faucett created this Life Tributes page to make it easy to share your memories.