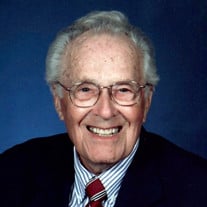 RICHMOND, Ind. - Philip D. Blose, age 95, of Richmond, Indiana, died Tuesday, November 24, 2020, at his home. Born January 12, 1925, in Whitewater, Indiana, to Harold D. and Martha Alice Ross Blose, Phil was a 1942 graduate of Brookville High School. He was a proud World War II veteran who served in the U.S. Navy aboard the USS Thornhill (DE-195). For some time he worked for the Franklin County National Bank and later began his career with the Federal Land Bank Association in Louisville, Kentucky. Phil was an assistant Vice President and retired in 1987 after 23 years of service. He was an active member of First English Lutheran Church and various community organizations. Phil enjoyed being a Mason and Shriner and was the oldest living member of Brookville Legion Post #77. Phil never knew a stranger. He lived a full life traveling, enjoying music, and being with his family. Survivors include his wife of 76 years, Bernice J. "Bernie" Wolber Blose; daughters, Beverly (Ron) Johnson of Owensboro, Kentucky, Barbara Leffingwell of San Antonio, Texas, and Penny (Tim) Lakoff of Richmond; grandchildren, Corey (Ashley) Johnson of Kentucky, Keeli (Joseph) John of Georgia, Anjie (Michael) Frost of Texas, Jessica (Jeremy) Cannon of California, Ben Lakoff of California, and Pete (Jenna) Lakoff of Florida; 10 great-grandchildren; brother, Max A. (Sally) Blose of Texas; nieces; nephews; cousins; and many friends. He was preceded in death by his grandson, Tony Leffingwell; son-in-law, Hal Leffingwell; parents; and brother, Donovan R. Blose. Due to the current COVID-19 situation, we regret to inform you that the graveside service for Philip D. Blose will be private with Pastor Chip Belanga officiating. Burial will be in Maple Grove Cemetery in Brookville, Indiana, with military honors provided by the Franklin County Honor Guard. Arrangements are being handled by Doan and Mills Funeral Home, 790 National Road West, Richmond. Memorial contributions may be made to: First English Lutheran Church, 2727 East Main Street, Richmond, IN 47374. Condolences may be sent to the family via the guest book at www.doanmillsfuneralhome.com.

The family of Philip D. Blose created this Life Tributes page to make it easy to share your memories.