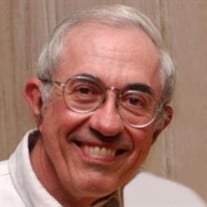 RICHMOND, Ind. – Peter Skinner Stowe, age 79, of Richmond, Indiana, died suddenly of a stroke Thursday, October 8, 2020, at Reid Health. Peter was born on March 11, 1941, in New York City, New York, to George Edward and Betty Abigail Skinner Stowe. He graduated from The Pingry School in New Jersey and earned a bachelor’s degree in economics from Earlham College in 1963. Peter went on to receive a master’s degree and his Ph.D. in economics from Purdue University. He taught at Southern Illinois University and then worked at the National Center for Education Statistics, retiring after 25 years. Peter worked to help make Pell Grants more accessible and researched outcomes of college graduates. He was a former board member of the Richmond Community Food Pantry and the Conflict Resolution Center. Peter attended Clear Creek Friends Meeting. He was an avid tennis player and enjoyed music. Peter also loved bicycling, flower gardening, hiking, and spending time with his family. Survivors include his wife of 56 years, Jane Telfair Stowe; son, Timothy David Stowe (Ingrid Andersen) of California; grandchildren, Isabel, Annika, and Nicholas; brother, Tom (Sandi) Stowe of Massachusetts; nieces; nephews; cousins; and many friends. He was preceded in death by his parents. A memorial service for Peter Skinner Stowe to be held at Clear Creek Friends Meeting will be announced by the family at a later date. Arrangements are being handled by Doan & Mills Funeral Home, 790 National Road West, Richmond. Memorial contributions may be made to: CADASIL Together We Have Hope Non-Profit Organization, 3605 Monument Drive, Round Rock, TX 78681 or online at www.cadasilfoundation.org, to support the research for the type of vascular dementia which Peter had. Condolences may be sent to the family via the guest book at www.doanmillsfuneralhome.com.

The family of Peter Skinner Stowe created this Life Tributes page to make it easy to share your memories.