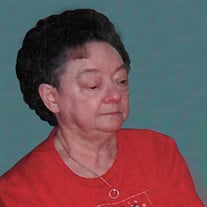 RICHMOND, Ind. – Martha Louise Werking, 87, of Richmond, Indiana, passed away Wednesday, December 30, 2020, at Arbor Trace, surrounded by her kind and dedicated caregivers. Born March 18, 1933, near Bentonville, Indiana, to William Ellis and Flora Alice Shigley Clark, Martha lived in the Wayne County area most of her life. She began her education at the Jacksonburg schoolhouse before transferring to Hagerstown for her high school education. Martha was a 1951 graduate of Hagerstown High School. She worked at Second National Bank in Richmond, before working at Kurdy’s Chevrolet downtown. When Kurdy’s moved to their National Road East location, Martha served as the office manager. She later worked in the Wayne County offices, where she met her husband, Roy Werking. After Roy’s passing due to cancer, Martha worked at Walmart until 2017. She was a member and past president of the Professional Business Club in Richmond. Martha was also a former member of Jacksonburg Christian Church and most recently attended First Christian Church in Richmond. She enjoyed solving crossword and word search puzzles and traveling with Roy. Survivors include her stepdaughter, Sharon (Steve) Terhune of Modoc, Indiana; grandson, Howard Clark of Richmond; step-grandson, Jim Culbertson of Hagerstown; great-granddaughter, Adrihanna Ruby Clark of Evansville, Indiana; step-great-grandson, Zachary Culbertson of Hagerstown; son-in-law, Phil Lee of Richmond; siblings, Joan Patterson of Shallotte, North Carolina, and Robert D. (Roxann) Clark of Hagerstown; 12 nieces and nephews; and numerous great-nieces and great-nephews. She was preceded in death by her husband of 10 years, Roy Werking; daughter, Linda Lee; parents; and sister, Jenny Marie Stevens. Due to the current COVID-19 situation, we regret to inform you that services for Martha Louise Werking will be private with Pastor Paul Gearhardt officiating. Burial will be in Brick Cemetery. A celebration of Martha’s life is being planned by the family for next summer. Arrangements are being handled by Doan & Mills Funeral Home, 790 National Road West, Richmond. In lieu of flowers, memorial contributions may be made to: Evansville Association for the Blind, 500 North 2nd Avenue, Evansville, IN 47710 or Indiana School for the Blind & Visually Impaired, 7725 North College Avenue, Indianapolis, IN 46240 in honor of Martha’s great-granddaughter, Adrihanna, who was born blind or to a charity of the donor’s choice. Condolences may be sent to the family via the guest book at www.doanmillsfuneralhome.com.

The family of Martha Louise Werking created this Life Tributes page to make it easy to share your memories.