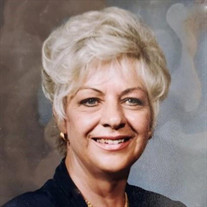 Marlene Avanelle Penfield passed away on September 22, 2021, at the age of 79 years. She was born on March 3, 1942, to Raymond and Lillian Lange and was raised in Wauwatosa, Wisconsin, with her younger brother, Larry. Marlene married Jerry Penfield on October 7, 1962, and they raised their two children, Brian and Michelle, initially in New Berlin, Wisconsin, and then in Bruce, Wisconsin. While she and Jerry divorced, they reconnected during her last few years as friends. Marlene was proud of her working career and enjoyed the personal connections that she made wherever she worked. Marlene worked at Mt. Senario College in Ladysmith, Wisconsin, for over 20 years until it closed in 2002. She relocated to Richmond, Indiana, to be closer to her daughter, Michelle and her family. Marlene made Richmond her home and was proud of her new southern Indiana heritage. She worked at Earlham College until her retirement. Marlene enjoyed working with the guys in the maintenance department, where she found love once again. Marlene found great happiness with her friends and chosen family in Richmond. Marlene is survived by her son, Brian (Marcy) Penfield of Kewaskum, Wisconsin; daughter, Michelle (Tom) Parkevich of Jacksonville, Illinois; grandchildren, Beau, Levi, and Veronica Parkevich and Emma and Bruce Penfield; and brother, Larry Lange and his family. Marlene is further survived by Heather Williams, Jennifer Fitzwater, Valerie Hunsinger, and Travis Williams among other family members and close friends. Marlene was preceded in death by her parents and her significant other of 15 years, Curtis Williams. Special thanks and appreciation to Susan Paffrath for helping Marlene during her last weeks and being with Marlene as she took her last breaths. Private services will be held and a public visitation in Richmond will take place at a later date. Marlene requested memorials be gifted to the Animal Care Alliance in Richmond, 1353 Abington Pike, Richmond, IN 47374. Condolences may be sent to the family via the guest book at www.doanmillsfuneralhome.com.

Marlene Avanelle Penfield passed away on September 22, 2021, at the age of 79 years. She was born on March 3, 1942, to Raymond and Lillian Lange and was raised in Wauwatosa, Wisconsin, with her younger brother, Larry. Marlene married Jerry... View Obituary & Service Information

The family of Marlene Avanelle Penfield created this Life Tributes page to make it easy to share your memories.