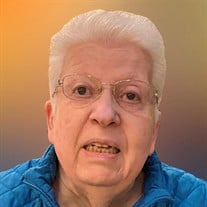 RICHMOND, Ind. – Linda Kay Elliott, age 78, of Richmond, Indiana, died Sunday, June 13, 2021, at home surrounded by her family. Born July 15, 1942, in Arba, Indiana, to Bert and Esther Ketring Manning, Linda lived in Wayne County, Indiana, most of her life. She was a 1960 graduate of Spartanburg High School. Linda retired from the mortgage lending department of First Bank Richmond in 2007. She loved watching birds and spending time with her grandchildren and great-grandchildren. Survivors include her daughter, Kristin Elliott York (Tim Venable) of Richmond; son, Todd Elliott of Bloomington, Indiana; granddaughter, Paige York; grandsons, Tyler York and Owen Elliott; great-grandchildren, Bryleigh Whalen and Noah Parrett; brother, Gary (Janet) Manning; nieces; nephews; cousins; and many friends. She was preceded in death by her parents. There will be no services for Linda Kay Elliott. Arrangements are being handled by Doan & Mills Funeral Home, 790 National Road West, Richmond. Memorial contributions may be made to: National Parkinson Foundation, P.O. Box 5018, Hagerstown, MD 21741. Condolences may be sent to the family via the guest book at www.doanmillsfuneralhome.com.

The family of Linda Kay Elliott created this Life Tributes page to make it easy to share your memories.