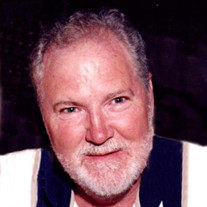 CENTERVILLE, Ind. – Larry Norman Moore, age 76, of Centerville, Indiana, died peacefully with family at his side Sunday, April 25, 2021, at Reid Health in Richmond, Indiana. From 1977 through the summer of 2020, Larry and his wonderful wife of 57 years, Carol, made Pemberville their home. They selected Pemberville because they wanted their two sons, Daryl and Darrin, to have all the advantages they’d enjoyed of being raised in a wholesome small town—a decision for which their sons are eternally grateful. Last September, in order to be surrounded by their large families, Larry and Carol moved back to Centerville into the home in which his parents and then his dear sister, Pat, had lived until their deaths. When Pat passed away, the house was inherited by her son, Jamie, whom Larry embraced as his own. Larry was born October 12, 1944, in Richmond, Indiana, to a factory worker, Paul B. and Betty Lamb Moore. He graduated from Centerville High School in 1962 and attended IU East. Larry was an industrial designer, real estate developer, entrepreneur, and finally, a restaurateur. He designed many industrial production lines for others and his greatest enterprise was the plastic recycling plant he designed, installed, and operated for over fifteen years on the edge of town. For a decade he and Carol managed The Forks, Pemberville’s oldest restaurant. Larry was an enormously friendly man, generous with his time and energy for many causes, including serving as the board president of Otterbein Portage Valley Nursing Home in Pemberville. The Moores were members of Bethlehem Lutheran Church, where Larry served terms as a deacon and on a pastoral search committee. Larry was active in his sons' Boy Scout Troop activities and coached several of their baseball and soccer teams. He took his family on several ski trips with the town’s ski club, and each year took the family on a grand camping excursion across America to visit her many majestic National Parks. Larry’s competitiveness made him a fierce euchre and tennis player. For decades until last spring when his failing health forced him off the court, he cherished playing tennis every week with a group of dear friends. Larry and Carol immensely enjoyed sitting on the front porch of their East Front Street home and visiting with friends, neighbors, and passers-by. His final wish was that his friends and family ensure that after he died, he would never vote democrat. Survivors include his wife, Carol Joan Bradley Moore; sons, Daryl (Wendy) Moore and Darrin (Lisa) Moore; grandchildren, Reagan, Lauren, Sierra, and Jackson Moore; sister, Judy (Gordon) Matson. He was preceded in death by his parents and sister, Patricia Ann Moore. Memorial visitation for Larry Norman Moore will be from 5:00 to 8:00 p.m. Friday, April 30, 2021, at Mills Funeral Home, 405 East Main Street, Centerville. Memorial service will follow at 8:00 p.m. Friday, April 30, 2021, at Mills Funeral Home with Chaplain Rick Alvey officiating. In lieu of flowers, memorial contributions may be made to: Boy Scout Troop #344, 718 West Linden Street, Gibsonburg, OH 43431. Condolences may be sent to the family via the guest book at www.doanmillsfuneralhome.com.

CENTERVILLE, Ind. &#8211; Larry Norman Moore, age 76, of Centerville, Indiana, died peacefully with family at his side Sunday, April 25, 2021, at Reid Health in Richmond, Indiana. From 1977 through the summer of 2020, Larry and his wonderful... View Obituary & Service Information

The family of Larry Norman Moore created this Life Tributes page to make it easy to share your memories.