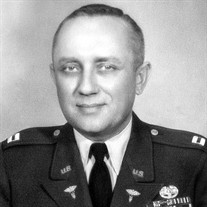 RICHMOND, Ind. – Lacy Clayton Barnett passed away on October 2, 2021, at the age of 94, in Indianapolis, Indiana. He was born in Empire, Alabama, to Thomas Columbus and Artie Missie Barnett. As the youngest of eight children growing up during the Great Depression, Lacy acquired a strong work ethic and commitment to his family that lasted throughout his life. He knew what it meant to be poor, and he recounted stories of having only one pair of overalls that he washed and ironed every day. During high school, Lacy worked at a grocery store to support his mother, and he continued his support of her for the rest of her life. Not only was Lacy generous to his family, but also to local food banks where he was a frequent and continuing contributor. Lacy’s life took him from rural Alabama to many states across the U.S. and to many countries in Asia and Europe. In 1944, upon graduation from Dora High School, he joined the U.S. Navy before the end of World War II. After a few months at sea, Lacy knew that he was better suited to be on dry land. When it came time to re-enlist, Lacy joined the Army. After World War II, he was stationed in Japan where he met Alice, his wife of 67 years. In the summer of 1950, Lacy served as a combat medic with the U.S. Army’s 34th Infantry Regiment in Korea. He was among only 184 soldiers out of 1,981 from his regiment to have survived the intense combat they endured. Due to their actions, his unit received the Bronze Star Medal for valor. Many years later, his experiences in Korea led him to write a book about the hardships and casualties suffered by U.S. soldiers during the Korean Conflict. Following his service in Korea, Lacy remained on active duty in the Army with assignments in Japan, Vietnam, Washington, Georgia, Alabama, Texas, and Massachusetts. His distinguished service resulted in a direct commission as a second lieutenant in the Medical Service Corps in 1953. After his commissioning, he served in Tokyo and Okinawa, Japan. During this time, Lacy took college courses at night through the University of Maryland’s Far East Branch. He showed such promise as an officer that the Army command allowed him to finish his bachelor’s degree as a full-time student at the University of Omaha (now the University of Nebraska Omaha) in 1961. In the early 1960s, Lacy had two tours of duty in Vietnam where he supervised nine medical teams that traveled all over South Vietnam to treat South Vietnamese civilians. Lacy and his teams worked often in remote enemy-occupied areas, but they were never harmed. He returned to Okinawa as the Chief of Medical Plans and Operations of the Medical Center. His last post was at Ft. Devens, Massachusetts. After serving his country with distinction for 22 years, Lacy retired at the rank of Major to enter a busy civilian career. He was well suited to work as a hospital administrator with his many years of experience in the Medical Service Corps. Lacy worked at Randolph County Hospital in Winchester, Indiana, and then later at Union City Hospital in Union City, Indiana. While working full time, he earned a Master of Science in health science from Ball State University in 1973. Full retirement and a desire for more adventure allowed him and Alice to travel across the U.S. and to Europe and Asia. They met many friends on their travels. They both also enjoyed playing in master bridge events in Indiana and Ohio. Survivors include his son, Michael Barnett; daughter, Gwendolen (Michael) White; grandchildren, Kristy Barnett, Edward (Danae) Barnett, and Alicia White; and great-grandchildren, Robert Brown, Mitchell Brown, Samuel Brown, and Julia Barnett. He was preceded in death by his wife, Alice; grandson, Michael Robert Barnett; step-granddaughter, Michelle Anne White; five sisters, Mattie, Ollie, Letha, Oretta, and Lucy; and two brothers, Sanford and Paul. As a veteran of World War II, the Korean Conflict, and Vietnam, Lacy will be buried at Arlington National Cemetery. A private, family memorial service will be held to honor his memory. The family suggests that memorial contributions be made to the charity of your choice or local food bank. Condolences may be sent to the family via the guest book at www.doanmillsfuneralhome.com.

RICHMOND, Ind. &#8211; Lacy Clayton Barnett passed away on October 2, 2021, at the age of 94, in Indianapolis, Indiana. He was born in Empire, Alabama, to Thomas Columbus and Artie Missie Barnett. As the youngest of eight children growing up... View Obituary & Service Information

The family of Lacy Clayton Barnett created this Life Tributes page to make it easy to share your memories.