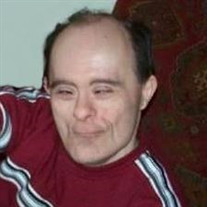 RICHMOND, Ind. – Kevin P. Demuth, age 64, of Richmond, Indiana, died Wednesday, January 12, 2022, at Reid Health. Born October 31, 1957, in Lebanon, Indiana, to Willis G. “Bill” and Rita A. Picard Demuth, Kevin lived in Richmond most of his life. He attended Green Acres and Achieva and retired from the Achieva workshop. Kevin’s prized possessions were his stuffed animals, which he kept in meticulous order, and his squirt gun that he carried with him wherever he went, including when he slept. Kevin always had a smile on his face, and he never met a stranger. According to his mother, Kevin was the happiest of the bunch. He brought joy to all his family and will be remembered with great affection. Survivors include his siblings, Suzanne Cramer of Indianapolis, Indiana, and Dianne Reed and Brian Demuth, both of Richmond; nieces and nephews, Lisabeth (Jay) Hudyk, Christopher (Diana) Feaster, Carole Reeves, Kelley (Scott) Hunt, Annemarie (Keith) Fessler, Lori (Seamus) Wheeler, Natalie Layne, and Erin (LaRon) Henry; 14 great-nieces and great-nephews; cousins, and many friends. He was preceded in death by his parents and brothers, Andrew and David Demuth. The family would like to thank Kevin’s caregivers, who lovingly took care of him. Graveside service for Kevin P. Demuth will be held at 1:30 p.m. Tuesday, January 18, 2022, at St. Mary Catholic Cemetery, 2317 Boston Pike, Richmond. Arrangements are being handled by Doan & Mills Funeral Home, 790 National Road West, Richmond. Memorial contributions may be made to: National Down Syndrome Society, 8 East 41 Street, 8th Floor, New York, NY 10017. Condolences may be sent to the family via the guest book at www.doanmillsfuneralhome.com.

The family of Kevin P. Demuth created this Life Tributes page to make it easy to share your memories.