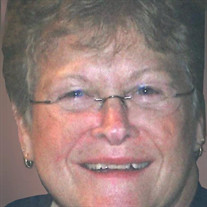 RICHMOND, Ind. – Kathleen Y. Kegley, age 78, of Richmond, Indiana, died Tuesday, November 30, 2021, at Reid Health. Born June 7, 1943, in Soldier, Kentucky, to James Luther and Dessie Eldridge Kegley, Kathleen lived in Wayne County, Indiana, most of her life. She was a 1961 graduate of Lincoln High School. Kathleen worked for a local optometrist, until retiring in October 2013 and previously worked at Belden. She also co-owned The Sampler, located on 4th Street in Richmond. Kathleen enjoyed bicycling and reading and was an animal lover. Survivors include her nieces, Brenda Stewart and Julia Henderson, both of Cambridge City, Indiana, Cheryl Ann Million of Lawrence, Indiana, and Diana Rinehart of Richmond; nephews, Michael Miller of Coatsville, Indiana, and Pat (Sharon) Miller of Indianapolis, Indiana; great-nieces; great-nephews; and many friends, including her dear friend, Jan Jennings of Richmond. She was preceded in death by her parents; sister, Shirleen Miller; and brother, Carmody Kegley. There will be no public services for Kathleen Y. Kegley. Arrangements are being handled by Doan & Mills Funeral Home, 790 National Road West, Richmond. Memorial contributions may be made to: Cambridge City Public Library, 600 West Main Street, Cambridge City, IN 47327 or to a local animal shelter. Condolences may be sent to the family via the guest book at www.doanmillsfuneralhome.com.

The family of Kathleen Y. Kegley created this Life Tributes page to make it easy to share your memories.