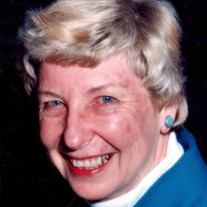 RICHMOND, Ind. – June Tripp Quigg, age 87, of Richmond, Indiana, passed away peacefully Saturday, October 10, 2020, at Friends Fellowship Community. Born June 19, 1933, in Richmond, Indiana, to Marion Elmer and Ruth Allen Coulter, June was a life-long resident of Richmond and, since 1964, spent a considerable part of the year at her home in Glenn, Michigan. After graduating from Richmond High School, June earned a Bachelor of Fine Arts degree from Indiana University, where she was a member of Kappa Kappa Gamma sorority. During her life in Richmond, June was involved with many organizations, creating lifelong friends along the way: Collegiate Club; P.E.O., Chapter AU; the Richmond Art Museum; and the Wayne County Historical Museum. She served on the board of the Richmond Day Nursery & Preschool and devoted many hours volunteering and supporting local charities and organizations. A woman of deep faith, June attended First Friends Meeting. Blessed with a kind smile and striking blue eyes, June was an artist at heart, and she loved sharing her view of the world and those around her with paintings, sketches, calligraphy, and wood block prints. Whether spending time in Michigan, enjoying RV trips with Jim, or exploring the world, June was always up for an adventure. Survivors include her sons, David Hagerman (Mary Ellen) Tripp of North Carolina, Malcolm Allen (January Elizabeth) Tripp of Michigan, and Robert Bruce (Leanne Delynn) Tripp of Indiana; stepsons, James Robert (Kelli Anderson) Quigg III and William Murray (Felicia Shrout) Quigg, both of Richmond; grandchildren, William George, Daniel Eric, and Matthew Edward Tripp; step-grandchildren, Suzanne Rae, Margaret Mae, Kathryn Ann, John Robert, Cailyn Belle, Lorelei Grace, and Brecklyn Maxine Marie Quigg; nieces; nephews; cousins; and many friends. She was preceded in death by her first love of 32 years, George Hagerman Tripp, who left this earth September 5, 1987; second love of 25 years, James Robert Quigg Jr., who passed away June 3, 2016; parents; and brothers, Allen and Gene Coulter. A private graveside service and burial will be held at the convenience of the family at Earlham Cemetery. A memorial service will be announced later by the family. Arrangements are being handled by Doan & Mills Funeral Home, 790 National Road West, Richmond. The family invites you to celebrate June’s life with a memorial contribution to your favorite charity. Thank you. Condolences may be sent to the family via the guest book at www.doanmillsfuneralhome.com.

The family of June Tripp Quigg created this Life Tributes page to make it easy to share your memories.