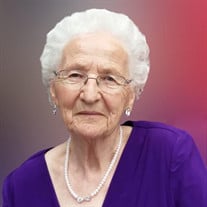 RICHMOND, Ind. – June Celeste Overdorf, age 93, of Richmond, Indiana, went home to be with her Lord and Savior, Jesus Christ, on Wednesday, September 23, 2020. Born October 8, 1926, in Galesburg, Illinois, to George and Gladys Williamson Shover, June grew up on a farm, where she developed a strong work ethic. June was a graduate of London Mills High School and a 1947 graduate of Galesburg Cottage Hospital School of Nursing. She also trained through the U.S. Cadet Nurse Corps. June worked as a registered nurse for many years. She married the love of her life, Lee Owen Overdorf, on August 21, 1949. They were blessed with four children and five grandchildren. June was always a faithful disciple of Christ; demonstrating her faith by teaching children, serving the community through the Gideon’s organization, and playing the piano at church for over 30 years. She was a member of LifeSpring Church North. June’s granddaughter penned the following on receiving news of her death, “My loving, funny, and fiercely faithful grandmother passed away today. I will always remember her for her fast fingers on the piano, her love of hummingbirds, and the deep faith and commitment she had for her family. We are selfishly grieving her loss but comforted by the fact that she was so excited to be reunited with her husband, who she loved without ceasing for 24 years after his death in 1996. You will be much missed and long treasured.” Survivors include her three daughters, Susan (Steve) Tincher of Richmond, Gloria Overdorf of Indianapolis, Indiana, and Mary (Robert) O’Bannon of Muncie, Indiana; son, Roger (Patricia) Overdorf of The Villages in Florida; five grandchildren, Benjamin (Tam) Tincher of Columbus, Indiana, Joshua (Courtney) Overdorf and Jessica (Alan) Placko, both of Cincinnati, Ohio, Juliana Overdorf of Dayton, Ohio, and Quinn Overdorf of Enon, Ohio; and sister, Jane Davis of London Mills, Illinois. She was preceded in death by her husband of 47 years, Lee O. Overdorf, who died October 15, 1996; parents; and brothers, Beverly and Robert Shover. Visitation for June Celeste Overdorf will be from 10:00 a.m. to 12:00 p.m. Tuesday, September 29, 2020, at Doan & Mills Funeral Home, 790 National Road West, Richmond. Funeral service will follow at 12:00 p.m. Tuesday, September 29, 2020, at Doan & Mills Funeral Home with Pastor David Anderson and Pastor Robert O’Bannon officiating. Please plan to wear your own mask in the funeral home. Burial will be in Earlham Cemetery. Memorial contributions may be made to: LifeSpring Church North, 5600 North U.S. 27, Richmond, IN 47374; Gideons International for the Memorial Bible Fund, P.O. Box 1092, Richmond, IN 47375; or Child Evangelism Fellowship, P.O. Box 348, Warrenton, MO 63383. Condolences may be sent to the family via the guest book at www.doanmillsfuneralhome.com.

The family of June Celeste Overdorf created this Life Tributes page to make it easy to share your memories.