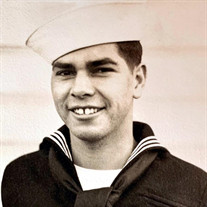 SUNBURY, Ohio – Joseph Merle Schurbrock, age 99, formerly of Richmond, Indiana, died Tuesday, December 1, 2020, at his daughter’s home with his family by his side. Joseph was born on June 27, 1921, in Centerville, Indiana, to Francis and Marie Roberts Schurbrock. He served in the United States Coast Guard during WWII. Joseph worked at Alcoa for 34 years, before retiring in 1982, and belonged to the Alcoa 25-Year Club. He proudly built a home in Indiana where he resided with his wife and children for many years. Joseph will be fondly remembered by his family and friends as an avid gardener, golfer, fisherman, woodworker, and Cincinnati Reds fan. Survivors include his daughters, Sherry (Paul) Whitehead of Sunbury and Jane (Craig) Southwell of Nebraska; daughter-in-law, Mette Schurbrock of Indianapolis, Indiana; grandchildren, Alison, Amy, April, Brittany, Andrew, Michelle, and Erik; and great-grandchildren, Izabela, Lilyana, Victoria, Robert Junior, Landen, Eric, Cameron, Reginald Jr., Rosalia, Mylah Quintyn, Erika, Rachael, and Kennedy. He was preceded in death by his beloved wife of 63 years, Ruth Belle Clunk Schurbrock; son, Steven Schurbrock; and siblings, Harriet Thompson, Franklin Schurbrock, Barbara Ach, and Betty Farr. The family would like to kindly thank Capital City Hospice for their compassionate and respectable care. A private graveside service for Joseph Merle Schurbrock will be held at Greens Fork South Cemetery with military honors provided by the Wayne County Honor Guard. Arrangements are being handled by Doan & Mills Funeral Home, 790 National Road West, Richmond. Condolences may be sent to the family via the guest book at www.doanmillsfuneralhome.com.

The family of Joseph Merle Schurbrock created this Life Tributes page to make it easy to share your memories.