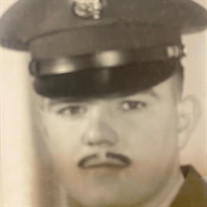 RICHMOND, Ind. – John B. Steele, age 78, of Richmond, Indiana, went home to be with the Lord Thursday, February 25, 2021, at Golden LivingCenter - Golden Rule. Born September 8, 1942, in Richmond, Indiana, to Everette D. and Sadie McDaniel Steele Sr., John lived in Wayne County, Indiana, most of his life. He graduated from Greens Fork High School in 1961. Following graduation, John joined the U.S. Army, serving on active duty from 1961-1970, which included a deployment to Vietnam from 1969-1970. After returning home from Vietnam, he transitioned to the U.S. Army Reserve, serving with the 70th Infantry Division (Trailblazers) until 1978. John then became an Operations NCO and ROTC Instructor at the University of Arkansas-Monticello until he retired in 1987. John was a longtime employee of Belden Wire & Cable in both Richmond and Dumas, Arkansas, retiring in 1997. Survivors include his wife of 56 years, Brenda Conner Steele; children, LTC Lawrence “Lonnie” (Donna) Steele of Fort Leavenworth, Kansas, Linda Steele of Richmond, and Richard “Ricky” (Jackie) Steele of Paragould, Arkansas; grandchildren, Tyler White, Anslee Posey, Drew Steele, and Ashley Steele; three great-grandchildren; brother, Everette (Sandra) Steele Jr. of Richmond; sister, Irene Johnson of Richmond; multiple nieces, nephews, and cousins; and many friends. He was preceded in death by his parents and brother, Rueben Steele. Visitation for John B. Steele will be from 1:00 to 2:00 p.m. Tuesday, March 2, 2021, at Doan & Mills Funeral Home, 790 National Road West, Richmond. Funeral service will follow at 2:00 p.m. Tuesday, March 2, 2021, at Doan & Mills Funeral Home with Pastor Michael Stonebraker officiating. Please plan to wear your own mask in the funeral home. Burial will be in Economy Cemetery with military honors provided by the Wayne County Honor Guard. Memorial contributions may be made to: Alzheimer's Association, 50 East 91st Street, Suite 100, Indianapolis, IN 46240. Condolences may be sent to the family via the guest book at www.doanmillsfuneralhome.com.

The family of John B. Steele created this Life Tributes page to make it easy to share your memories.