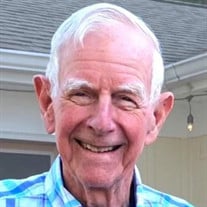 RICHMOND, Ind. – John Ross Dehner M.D. was many things. He was a highly skilled and exceptionally kind physician, who treated thousands of cancer patients over a career that spanned decades. He was a friend to all and a generous supporter of local businesses and causes. He was an enthusiastic St. Louis Cardinals baseball fan and a lover of high school basketball – a Richmond High School season ticket holder long after his four children graduated. And, he was a passionate political progressive, supporting candidates and causes that championed peace and justice. More than anything, however, he was a loving – and loved - husband, father, grandfather, brother, and friend. Dr. Dehner died Sunday, October 17, 2021, at Reid Health, surrounded by his family. He is survived by his beloved wife, Sandra Augustin Dehner; children, Jenny (Jeff) Cox, of Dayton, Ohio, Mary (John) Carpenter, of Nashville, Tennessee, John (Amber) Dehner, of Bloomington, Indiana, and Tom Dehner (Carol Mallory) of Boston, Massachusetts; stepchildren, Andrea Stanley, Michael Augustin, and Joseph Augustin, all of Richmond; stepdaughter-in-law, Karen Jonke; grandchildren, Abby (Sam) Marconi, Grace (Jack) Mullen, Jack Cox, Thomas Cox, Patrick Carpenter, Sally Carpenter, Ezra Dehner, Owen Dehner, Tobias Dehner, Isabel Mallory, and Theo Dehner; and step-granddaughters, Allison and Naedeine Stanley. He was preceded in death by his beloved parents, Ross and Helen Stufflebean Dehner; beloved wife of 52 years, Maribell Wheatley Dehner; sister, Martha Copher; and stepdaughter, Dana Augustin. Born in Missouri in 1934, John’s family moved to Elwood, Indiana, when he was a young boy. It was there John starred on the Elwood High School basketball team and graduated as valedictorian. He attended DePauw University, where he also played basketball and graduated in 1956. John and Maribell married in 1957, while he was a student at the Indiana University Medical School. After a brief medical residency in Minnesota and a stint in the United States Air Force at Langley Air Force Base in Virginia, where John served as a doctor, he and Maribell settled in Richmond. In 1974 and 1975, John studied radiation therapy at the University of Arizona, returning to Richmond where he became Richmond’s first radiation oncologist. Known for both his technical skill and calm, kind demeanor, Dr. Dehner offered care and comfort to people facing life-threatening cancers. Some of his happiest family memories came in Frankfort, Michigan, where the family has owned a summer cottage on Lake Michigan since 1986. Many happy days and nights were spent with his children, grandchildren, and friends, including walking on the beach, sitting around campfires, and playing Tripoly and Trivial Pursuit into the wee hours. John enjoyed traveling, particularly with a special group of friends from his days at DePauw. Over many years of annual trips, the couples in the “Beta Group” - named for the Beta Theta Pi fraternity - traveled all over the world. He was also a supporter of the Richmond Symphony Orchestra, Richmond Art Museum, and an active member of the Kiwanis Club, where he organized the annual Christmas party at the Richmond State Hospital. John also took great pleasure in purchasing raffle tickets for each of his 11 grandchildren, who delighted in occasionally receiving checks from “Papa” with their winnings. He particularly loved high school basketball. And, in recent years, John enjoyed traveling to New Castle, Indiana, for the annual holiday tournament, where he gave his grandchildren from Chicago and Boston a taste of the Hoosier state’s official pastime. Dr. Dehner was a naturally friendly person, who never went anywhere without saying hello and catching up on recent news with several people. He loved dining out, not so much for the food as the chance to talk to people, from longtime friends and neighbors to waiters and waitresses he’d just met. In his spare time, John enjoyed working with his hands making wooden furniture, which he delighted in giving to family and friends. John Dehner coat racks and coffee tables are still being used in homes around the country. He was also a lifelong learner and an avid reader, who often attended local lectures and presentations. And, he was a longtime parishioner at St. Mary Catholic Church, regularly bringing holy communion to the homes of elderly and sick people who couldn’t get to Mass. After his wife, Maribell, died in 2009, John married Sandra Augustin, a longtime family friend. The two shared 11 loving and happy years. Visitation for John Ross Dehner M.D. will be from 4:00 to 7:00 p.m. Friday, October 22, 2021, at Doan & Mills Funeral Home, 790 National Road West, Richmond. Liturgy of Christian Burial will be held at 11:00 a.m. Saturday, October 23, 2021, at St. Mary Catholic Church, 710 North A Street, Richmond with Fr. Sengole T. Gnanaraj officiating. Burial will be in St. Mary Catholic Cemetery. In lieu of flowers, memorial contributions may be made to: Alzheimer's Association, 50 East 91st Street, Suite 100, Indianapolis, IN 46240. Condolences may be sent to the family via the guest book at www.doanmillsfuneralhome.com.

RICHMOND, Ind. &#8211; John Ross Dehner M.D. was many things. He was a highly skilled and exceptionally kind physician, who treated thousands of cancer patients over a career that spanned decades. He was a friend to all and a generous supporter... View Obituary & Service Information

The family of John Ross Dehner M.D. created this Life Tributes page to make it easy to share your memories.