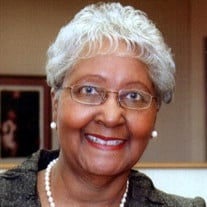 RICHMOND, Ind. - It is with great sadness that the family of Jewell Spears of Richmond announces she passed away peacefully in her sleep on October 31, 2021, at the age of 87. Mrs. Spears was a devoted mother, wife, friend, community volunteer, and a trailblazer in the field of nursing. She spent most of her life in Richmond. Jewell was born in Hazard, Kentucky, in 1933, one of 12 children of Saul and Janie Beatty King. The family moved to Richmond, Indiana, in 1943 in pursuit of better economic opportunities. Jewell attended Richmond High School and graduated in 1952. Always aspiring to be a nurse, she continued her education, enrolling in the combined Reid Memorial Hospital and Earlham College nursing program. Her education and training included intensive clinicals at Downey Psychiatric Hospital in Illinois and Cincinnati Children’s Hospital. Jewell graduated from Reid Memorial Hospital’s nursing school in 1955, as the first honor student in her class. That same year, she married Glen Spears, the love of her life. Jewell received her bachelor’s degree from Earlham College in 1957. After graduation, she worked as an instructor at the Reid Memorial Hospital School of Nursing. When the school closed in 1958, Mrs. Spears became Assistant Director of the nursing in-service department. She was instrumental in starting Reid’s nursing technician program. In 1963, Jewell worked at Wayne County Health Department’s prenatal and tuberculosis clinics. By 1964, she was working for the Richmond Community Schools system, where she implemented a pilot project for school social workers. The project was a precursor to the home school counselor program. Mrs. Spears returned to Reid Memorial Hospital in 1967, as an Emergency Department nurse. She was working in the department when the April 1968 explosion devastated downtown Richmond. After the explosion, Jewell helped develop a detailed disaster plan for the hospital. Mrs. Spears worked a total of 10 years in the Emergency Department, eventually becoming its Director of Nursing. In 1974, she was named Ambassador of the Year for Reid Hospital. Her career at Reid Memorial Hospital continued to flourish. She became the hospital’s Director of Nursing in 1977, Vice President of Nursing Services in 1979, and Vice President in 1982, serving in that position until her 1995 retirement. During her tenure at Reid, Mrs. Spears was responsible for several hospital departments. Among her many accomplishments was starting the Aurora chemical dependency program, Home Health Services Department, and Parish Nursing program. She also worked to have Reid’s Education Department become an accredited provider of continuing education for Registered Nurses. Upon her retirement, Jewell joined the Reid Hospital governing board, where she served for nine years. Governor Otis Bowen appointed Mrs. Spears to the Indiana Emergency Medical Services Commission in 1974. The commission developed standards for care and training for Emergency Medical Technicians and paramedics. The commission also developed a statewide emergency communications system, which later became 911. She remained on the commission until 1986, serving under Governor Bowen and Governor Orr. In 1987, Jewell was a member of a delegation of community leaders sent to visit Serpukhov, U.S.S.R., a sister city of Richmond, where she visited local hospitals and clinics. In 1989, Governor Robert D. Orr appointed Mrs. Spears to the Indiana State Board of Nursing Education and Registration, the state body that licensed nurses and approved nursing education programs. She later became President of the Board. Jewell furthered her own professional education by becoming a Diplomate of the American College of Healthcare Executives, completing the Western Network Nurse Executive training program at the University of California Berkeley, becoming a Certified Nursing Administrator, and taking graduate studies in nursing administration at the Indiana University School of Nursing. Mrs. Spears received many honors and awards during her lifetime, including Indiana’s Sagamore of the Wabash in 1986. She was also named the Indiana State Emergency Nurse Association’s Nurse of the Year, received the Lifetime Achievement in Nursing Award from the Indiana University School of Nursing, and was given Outstanding Alumni awards from Earlham College and Richmond High School. Jewell was involved in the community as a volunteer and board member at several local organizations, including the Townsend Community Center, Red Cross, Wayne County Welfare Board, Wayne County Foundation, and Richmond Art Museum. She also served on the board of Earlham College. Jewell was a mentor to her colleagues and encouraged their ongoing education and professional development. She was dedicated to excellence in the field of nursing and was a member of several professional organizations, including the Indiana Organization of Nurse Executives and Sigma Theta Tau International Honor Society of Nursing. Family and faith meant the world to Jewell, and she loved having gatherings, especially at holidays and birthdays. Jewell enjoyed gourmet cooking, art, design, fashion, reading, traveling, knitting, crocheting, and growing flowers and herbs. Mrs. Spears is survived by her children, Alan (Donna) Spears of Richmond, Ann (Ronnie) Dickson of San Rafael, California, Sheila Spears of Richmond, and Amy Spears (Barry Barker) of Indianapolis, Indiana. She also leaves many beloved nieces, nephews, and dear friends. Jewell was preceded in death by her husband of 52 years, Glen; parents; daughter, Sonya; and 11 siblings. A private, family service will be held at the Earlham Memorial Mausoleum. The family will have a public Celebration of Life service in the spring. In lieu of flowers, memorial contributions may be made to: Glen and Jewell Spears Endowment Fund, c/o Wayne County Foundation, 33 South 7th Street, Suite 1, Richmond, IN 47374; Earlham College, Office of Alumni & Development, Drawer 193, 801 National Road West, Richmond, IN 47374; Reid Foundation, 1100 Reid Parkway, Richmond, IN 47374; or IU East Nursing Fund, c/o IU East Office of Gift Development, 2325 Chester Boulevard, Richmond, IN 47374. Condolences may be sent to the family via the guest book at www.doanmillsfuneralhome.com.

RICHMOND, Ind. - It is with great sadness that the family of Jewell Spears of Richmond announces she passed away peacefully in her sleep on October 31, 2021, at the age of 87. Mrs. Spears was a devoted mother, wife, friend, community volunteer,... View Obituary & Service Information

The family of Jewell Spears created this Life Tributes page to make it easy to share your memories.

RICHMOND, Ind. - It is with great sadness that the family of...