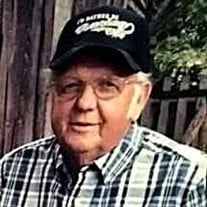 RICHMOND, Ind. – Jessie Harold “Tennessee” Tipton, age 84, of Richmond, Indiana, passed away Tuesday, December 21, 2021, at Reid Health. Jessie was born on October 12, 1937, to John and Laura Cable Tipton, in Cades Cove, Tennessee, (Great Smoky Mountains) where he was raised with his 11 siblings. Jessie proudly served his country as part of the U.S. Army for one year, nine months, and 28 days in the fight against North Korea. He was a member of the Belden 25-Year Club and belonged to the Loyal Order of Moose Lodge 167 for several years. Jessie’s love of NASCAR shined bright, and you would catch him every Sunday watching his favorite sport on TV, cheering on his favorite drivers. In his golden years, you could find Jessie on the porch, back patio, or in his recliner with his best friend, Buster, a French bulldog, sitting next to him. Survivors include his wife of 58 years, Joyce Sams Tipton; three beautiful children, Rhonda, Donald, and Danny Tipton, all of Richmond; four grandchildren, Bailey, Jessie, Amber, and Brittney; seven great-grandchildren, Shayleigh, Logan, Jace, Aubree, Addison, Jazna, and Hermione; numerous nieces, nephews, aunts, uncles, and cousins, who loved him dearly; and many friends. He was preceded in death by his parents and 11 siblings. Visitation for Jessie Harold “Tennessee” Tipton will be from 5:00 to 8:00 p.m. Tuesday, December 28, 2021, at Doan & Mills Funeral Home, 790 National Road West, Richmond. Funeral service will be held at 10:00 a.m. Wednesday, December 29, 2021, at Doan & Mills Funeral Home with Rev. Johnny L. Shepherd Jr. and Brother Doris Lakes officiating. Burial will be in Earlham Cemetery with military honors provided by the Wayne County Honor Guard. Memorial contributions may be made to: American Kidney Fund, 11921 Rockville Pike, Suite 300, Rockville, MD 20852. Condolences may be sent to the family via the guest book at www.doanmillsfuneralhome.com.

The family of Jessie Harold "Tennessee" Tipton created this Life Tributes page to make it easy to share your memories.