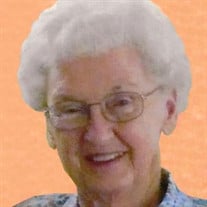 WAUSEON, Ohio – Jessie Snyder, age 91, formerly of Richmond, Indiana, died Wednesday, October 14, 2020, at Fulton Manor Nursing Home in Wauseon. Jessie was born on June 30, 1929, in Jackson County, Kentucky, to Wiley and Jane Witt Cunagin. She moved to Richmond in 1939, where she lived until moving to Ohio to live with her son in 2015. Jessie was a 1948 graduate of Whitewater High School. She graduated from Reid Hospital’s School of Nursing in 1951 and attended Earlham College in 1953. Jessie retired from Reid Hospital after 37 years, serving as both a registered nurse and Director of Nursing. She was a former member of Grace United Methodist Church in Franklin, Indiana, and Middleboro United Methodist Church in Richmond. Jessie was also a former member of the American Nurses Association and the Indiana State Nurses Association. Survivors include her son, Mark Richard (Kristy) Snyder of Wauseon; grandson, Alexander Joseph (Morgan) Snyder of West Unity, Ohio; great-granddaughter, Nora Grace Snyder; nieces; nephews; and many friends. She was preceded in death by her husband of 55 years, Richard H. Snyder, who died February 7, 2008; daughter, Jane Ann Snyder; parents; sisters, Letha Doan, Myrtle Bradburn, and Ada Gingry; and brothers, Russell and David Cunagin. Visitation for Jessie Snyder will be from 2:00 to 4:00 p.m. Sunday, October 18, 2020, at Doan & Mills Funeral Home, 790 National Road West, Richmond. Funeral service will be held at 10:00 a.m. Monday, October 19, 2020, at Doan & Mills Funeral Home with Pastor Joseph Seger officiating. Burial will be in Goshen Cemetery. Memorial contributions may be made to: Middleboro United Methodist Church, P.O. Box 1611, Richmond, IN 47375 or Reid Foundation, 1100 Reid Parkway, Richmond, IN 47374. Condolences may be sent to the family via the guest book at www.doanmillsfuneralhome.com.

The family of Jessie Snyder created this Life Tributes page to make it easy to share your memories.