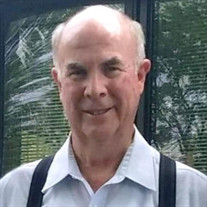 RICHMOND, Ind. – Jerry Lynn “Poppy” Allen, age 76, passed to his eternal life with Jesus Christ after a brief illness Thursday, April 22, 2021, at Reid Health. Born May 19, 1944, in Van Buren, Indiana, to Dorrell C. and Ruth Marceil Harvey Allen, Jerry was the oldest of eight children. Upon graduating from high school, he attended Ball State University, where he earned a bachelor’s degree in education. Jerry later obtained his master’s from Ball State University and an administrator’s license. He married Peggy Jane Wardwell August 27, 1966, in Marion, Indiana. A year later, they moved to Centerville, Indiana, where Jerry began a long career in education with Centerville-Abington Community Schools. He began his career as a junior high science teacher. Jerry also coached girls’ basketball and taught driver’s education. Later, he became the first Technology Coordinator for the school system. Jerry also served for two years as the first assistant principal at Centerville-Abington Elementary. He served briefly as interim principal at Rose Hamilton Elementary. Jerry was an adjunct professor at IU East for 20 years, where he taught computer education. While maintaining a full-time teaching career, Jerry also farmed for several years. He also served two years as a Wayne County Sheriff Reserve Deputy. Throughout his time in education, Jerry impacted so many lives through his selfless devotion, commitment, and willingness to help in any way. He retired from Centerville-Abington Community Schools after 37 years of service, in 2004. Jerry then went to work for the technology consulting firm, AdTec. He retired from AdTec at the age of 70. The most important thing in Jerry’s life was the desire to serve the Lord. In that service, he provided his family with immense love, guidance, and support. Jerry was a founding member of Hodgin Road Christian Church, where he later served as a deacon and then an elder. His church family was just as dear to him as his own family. Survivors include his wife of 54 years, Peggy Allen; daughters, Amy (Thomas) Ashley and Anne (Joseph) Elstro; grandchildren, Brittanni (Dustin) Elliott, Jakob Ryan, and Conner Elstro; great-granddaughter, Taryn Elliott; sisters, Janet Sheetz and Joyce (Gary) Frederick; brothers, Jene (Sarah) Allen, Jan (Gay) Allen, and Joe (Yvonne) Allen; sister-in-law, Margaret Wardwell; and many friends. He was preceded in death by his parents; mother-in-law and father-in-law, Dena and Thomas Wardwell; brothers, Jerald Allen and Jim (Cheryl) Allen; brothers-in-law, David Sheetz and Edward Wardwell; and nephew, Scott Allen. Jerry’s family would like to thank the hospice doctors, nurses, and nursing care assistants who helped provide tender and compassionate care to Jerry during such a difficult time. Special thanks are given to Dr. Mo; Dr. DeSantis; Amy, RN; Valerie, RN; Meagan, RN; Paula, NCA; and Jerry’s granddaughter, Brittanni, RN. A private funeral service for Jerry Lynn “Poppy” Allen will be conducted by Pastor Mike Smith and Pastor Derek Trenum. A celebration of Jerry’s life will be planned for the summer. Burial will be in Crown Hill Cemetery. Arrangements are being handled by Doan & Mills Funeral Home, 790 National Road West, Richmond. In lieu of flowers, memorial contributions may be made to: Hodgin Road Christian Church, 4050 Hodgin Road, Richmond, IN 47374 or your charity of choice. Condolences may be sent to the family via the guest book at www.doanmillsfuneralhome.com.

The family of Jerry Lynn "Poppy" Allen created this Life Tributes page to make it easy to share your memories.